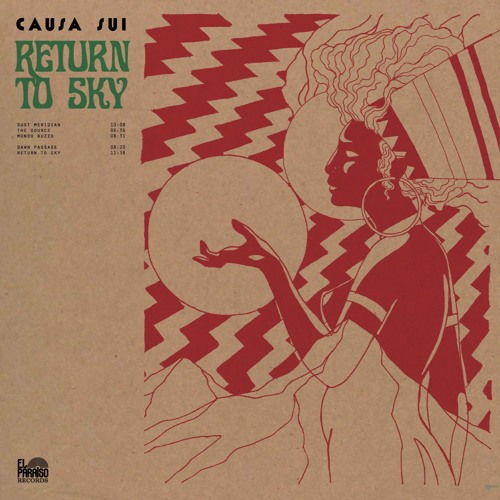 Causa Sui continue their quest to become the complete instrumental prog-psych-rock band with this latest impressive instalment of jam sourced goodness, “Return to Sky”. The bands trajectory has largely arced upwards in a relatively linear fashion, and, being terrifically good at what they do, their objectives seem to gradually shift in focus rather than take any major diversions. Fans of their recent blockbusting double sets “Euporie Tide” and “Live at Freak Valley” will find much to love here. The overarching question raised in my mind by 'Return to Sky' is whether my perceptions of its (unspoken) finality are the correct ones...

In comparison to its immediate predecessors. ‘Return to Sky’ is perhaps a more cosmically pastoral piece of work when compared to its rockier predecessors. Opener ‘Dust Meridian’ hits the start button with familiarly muscular drumming and bass note bending before spacing out into a keyboard led piece of kosmiche that is so 1973 that it should come with its own bottle of patchouli and flared jeans. Those familiar with ‘Homage’ from their recent sets will not a strong continuation of the theme here as the track unfolds over its duration. As with all Causa Sui releases, the deftness of touch is present and correct. They may be jammers but they do it with style and panache. Vanilla Fudge having a discourse about Krautrock with Pink Floyd anyone?

“The Source” is a sludgefest jam with its roots firmly in the Lynryd Skynryd territory of Sweet Home Alabama which then branches out into an edgy arabesque before depositing itself in your memory with a final dense drone of washing cymbals and gently undulating guitar in a very zen-prog way. Tasty. “Mondo Buzzo” is another bass and drum led workout which takes a while to work up a head of steam gradually incorporating Fender Rhodes stabs before exploding into an acid folk rock bonanza that is reminiscent of a wordless Wolf People (or maybe Wolf People are a wordful Causa Sui?). Either ways an avalanche of supremely distorted and duelling guitars duke it out to the max before once more an extended fade out that incorporates more of that gently sunbeamed guitar and atmospheric synth washes that are the chosen method of exiting on most of the gathered tunes herein. “Dawn Passage” repeats this trick but in reverse order before we reach journey's end with the rather beautiful sun dappled title track.

“Return to Sky” may be construed as a farewell with its reflective tone and stately sonic architecture. It’s also my favourite on the record as it builds and swells in a really engaging way allowing the tune to unfurl fully over the 11 minutes of its duration ending with a gentle decay into nothing – or Nirvana, take your pick. It certainly left me wondering if ‘Return to Sky’ was a valedictory statement for the band as it ascends into the upper atmosphere on thermals of crashing cymbals and Hendrix inspired guitar phrases. Given that all members of the band pursue highly interesting solo projects one may think this is the last transmission from the collective. Could it be that the band who’s name tells you a lot about where their heads are at have finally reached their point of singularity? Has the circle now been closed and will it remain unbroken? If so, remember them kindly – when they shone they shone brightly.