The British Space Group - The Phantasmagoria (The Collected Phantasm EPs) 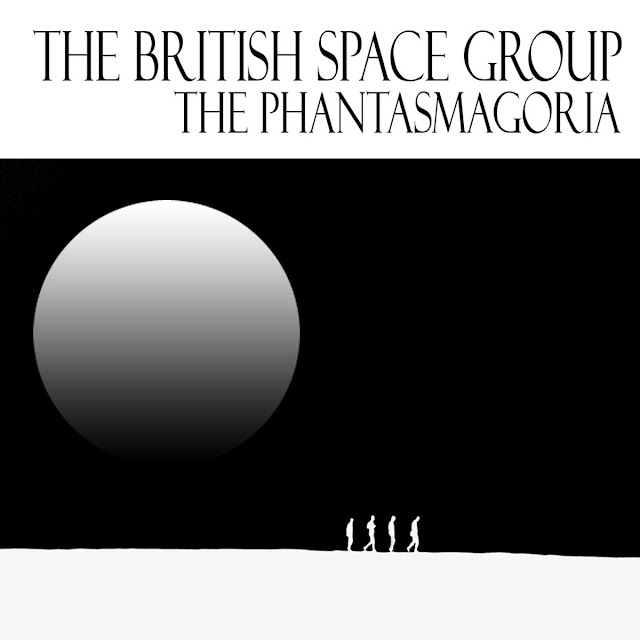 Previously reviewed here at The Active Listener, The British Space Group's début album 'Eyes Turned Skyward' remains a particular favourite of this writer, its evocative and descriptive vintage electronica evoking a very human sense of melancholy, icy beauty and dystopian unease. Essentially the work of one man, musician and writer Ian Holloway (whose solo releases encompassing post-industrial found sounds, field recordings, drone work are equally as essential and recommended), here The British Space Group make a welcome return with 'The Phantasmagoria', a collected set of the Group's 'Phantasm' EPs. A comprehensive combination of those release's 42 electronic 'radiophonic miniatures', each individual segment lasts around one to two minutes thus creating a veritable and pleasing labyrinth of moods and soundscapes, each piece taking the listener on another deliciously disorientating twist or turn in direction. Yet these short symphonies also coalesce into a coherent and substantive whole; The British Space Group's signature sound is more than strong enough, plus their easy way with creating a melody that will not leave your head for days ensures that this is an album that can very comfortably be enjoyed in one sitting.

Not unlike some of the BBC Radiophonic releases which conjure imagery and tales in one's mind by way of brief, atmospheric snippets of sound, effect and harmony, 'The Phantasmagoria' is a musical haunted house filled with emotive and otherworldly analogue electronics. From the introductory bleeps, hum and deceptively simple melody of 'Open' to the shimmering electric ghosts of 'Lights From Below', the Radioactivity-era Kraftwerk 'tomorrow's world' of 'Lost' and the unnerving, hunted and dread-filled bass notes of the serpentine 'A Strange New Friend', this is an album of numerous treasures. Holloway can effectively build a scene, story or mood in the listener's mind with comparative ease, though this perhaps belies just how carefully wrought and constructed these pieces are. Layered and perfectly paced, just as one segment fills the speakers with the promise of a shiny, automated and silvery world the next piece builds a disturbing, John Carpenter-esque scene of being stalked or followed through some futuristic city of glass and concrete ('Who' and 'Close' are especially tense and effective in this respect). Fans of the Ghost Box label, Concretism, the Ballardian epics of John Foxx and the work of such BBC luminaries as Delia Derbyshire, Daphne Oram, Ken Freeman ('The Tripods') and John W Hyde (Chocky') will find much to adore here.

The vintage electronic sounds utilised by Holloway are crystal clear, expansive and at times majestically symphonic in parts. One can envision this recording soundtracking an (on the surface) gleaming, seemingly utopian 'High Rise' vision of the future, whilst the music's darker minor key undercurrent suggests something much more dystopian and bleaker. An example is 'There's A Clue Here Somewhere' which propels along on a motorik, strident beat while all the while a sinister sprinkling of discordant notes informs us there is something more disturbing and dangerous at play. 'Waiting In The Blue Room's wraith-like drone and sudden heartbeats keep the listener in rapt attention (this is not background music in any sense) while 'The Message' is not unlike a deranged, nursery rhyme styled radio signal sent from an apocalyptic future. Moving on, 'One Last Unexpected Guest's electric chatter is utterly bewitching, floating as it does above cascades of electronic strings. 'On Unsolid Ground', with its echoing, shuddering advances and uneasy synthesized waltz is music to listen to on headphones, with the lights off to ensure you pick up every careful detail, nuance and sense of dread. Finally, the penultimate 'A Bittersweet Parting', its tolling bell like notes and orchestrated masses of strings rolling in like dark waves, should be first on the list for the soundtrack to the proposed new Quatermass adaptation whilst closer 'Home Again, Home Again' is a warm, melancholic jewel that seems to reverberate long after the album has finished.

With 'The Phantasmagoria' The British Space Group have created something that feels inexplicably familiar yet also unique and compellingly unusual. The fact that these pieces come from different EPs is lost as the album continues, they expertly morph and merge into an effective and engaging whole that is wholly transportive; such is the quiet power of this music that these pieces take the listener somewhere else entirely, to another world or time zone. Perhaps this is all in the mind; they are, after all, phantasms...but I strongly recommend you come along for the journey. You will not regret it.