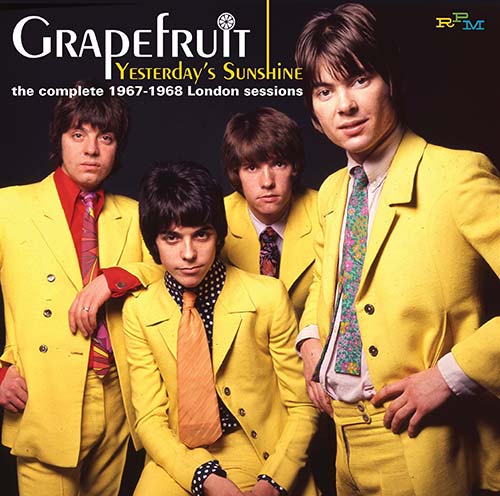 London band Grapefruit are mostly remembered these days as the first band to be signed to the Beatles Apple label, but they're deserving of much more than that footnote status as this new collection from RPM Records ably demonstrates.

Their debut album "Around" was originally released in late 1968/early 1969. "Yesterday's Sunshine" collects all of their studio recordings from 1967 and 1968, including tracks which were later remixed for the album, as well as a plethora of hard to find and unreleased extras.

"Around" has a great reputation among collectors, but to me, the original mixes contained here are even better. Hell, there's even a version of "Lullaby" produced by John Lennon AND Paul McCartney - the only co-production credit the two ever shared. Why this wasn't released originally is baffling, especially given the quality of this sped up version. With twenty tracks here, you'd expect a quality dip at some point, but apart from "Breaking Up a Dream", which is a backing track that never had the intended vocal recorded, there's nothing here that isn't, to my ears at least, absolutely essential.

The production on these tracks is fantastic, but it's George Alexander's wonderful songs that are truly the focus point here. There can be few songwriters of the era who can claim to have written so many memorable songs in such a short space of time. The singles have become well known over time, but album tracks like "Ain't it Good" are just as memorable, while rarities like "Somebody's Turning on the People" and particularly the moody, mellotron soaked King Crimson meets giallo-score style instrumental "Theme For a Lonely Queen (aka Twiggy)" are at least the match of anything that found its way onto the album. Admittedly, the shadow of the Beatles looms ever present here (check out the ooh-la-la-la's on "Round and Round"!), but when the songs are this good it really doesn't matter that influences are worn very much on sleeve.

Given the Beatles connection, as well as the quality of the singles, it's absolutely astonishing that this doesn't contain at least three number ones (although New Zealand band the Hi-Revving Tongues did have a local hit with their version of "Elevator"). Instead, "Around" became an underselling future collectable, leading to the band re-emerging with a substantially different lineup and sound for a second album shortly thereafter. Do yourself a favour: avoid that second album and get this right now. If you're a British psych-pop fan (even one who owns a copy of "Around"), this deserves a place in your collection right away.