Klaus Morlock - The Mirror And The Lamp 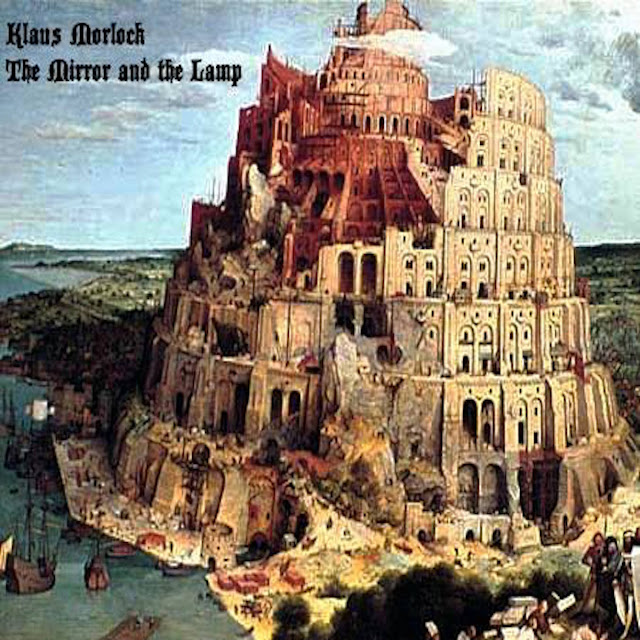 Klaus Morlock's previous excursions from the shadows, the eerie electronica of début album 'The Bridmore Lodge Tapes', the Victorian ghosts of follow up 'The Child Garden' and the spectral ambiance of the recent 'Penumbra' have helped establish this mysterious and faceless composer as a major figure in underground electronic and experimental music. His involvement with the equally esoteric 'Goat Man' soundtrack (long thought lost but recently exhumed) only confirms this status. His most recent opus, 'The Mirror And The Lamp', is now available from the ever splendid Reverb Worship label as a cassette release only (at least at this point in time). Contained within are all the arcane elements that make Morlock so uniquely special and which will delight his ever growing following; the sense of desolate beauty, the otherworldly and sepia tinted resurrection of sounds and ghosts from long gone decades (especially the 70's) and melodies that will embed themselves within your psyche in order to return to you when you are lying awake at the very darkest points in the night. 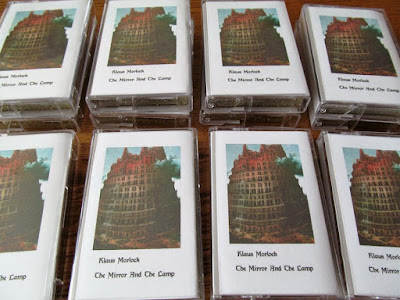 Opening with the unsettling, rasping sound of birdsong, 'After the Rain' has a swirling electronic backing and haunting, melancholic harpsichord melody which feels like the fresh, still, cool air after a sudden downpour. Mellotron choirs gradually and subtly enter, creating an almost post-apocalyptic beauty, harmonies descending and weaving in and out of each other in a cobweb of glistening vintage electronica. The music however is deceptively gentle, beneath the loveliness lurks a brooding and ghostly sense of displacement and loneliness. 'Bleeding' is next, its relentless drumbeat thundering the track ever onwards as dread filled bass notes and synth chords create a dystopian air that pervades long after the track is finished. This would have been a suitable soundtrack to the 1970's TV version of Terry Nation's 'Survivors'. Its bleak, virus ravaged landscape and sense of peril is ably reflected in Morlock's twisted, synthesised harmonies. 'Ephemera' reminds this listener of Morlock's equally splendid 'Penumbra' EP with its spectral melody and 70's flute recalling equal parts 'Lets Scare Jessica to Death' Lubos Fiser's 'Valerie And Her Week of Wonders' and Mr Brook's theme to TV's 'The Family'. Acoustic guitar arpeggios frame a creeping, foreboding sense of loss and horror. 'Torch' follows this same, spooked atmosphere with glistening glockenspiel and dark, sci-fi waves of analogue synth; the perfect soundtrack that never was to 'The Man Who Fell to Earth'. 'The Burning of Molly Kingston' hazes into view amidst dislocated voices, pensive piano and the crackling hum of choirs of massed vintage keyboards, an aural representation of the very best and most terrifying of John Wyndham's futuristic nightmares whilst 'Magic Circle' reels and dances ritualistically, a chiming merry go round of spellcraft and witchery. Next, Smokefront' descends with echoing percussion and disorientating, decaying guitar samples, a truly haunted keyboard motif stalking the electric wastelands.

Over on side two (how nice to be able to say that!) 'Marble' is a plaintive and melancholic harpsichord and piano piece that sits perfectly on the edge of disquiet; Morlock is a veritable wizard at this, there are no hammer horror shock theatrics here, just creeping, subtle disturbance that is hugely effective. 'Forest Demon' is a case in point; the sound of birdsong, the creaking of the woods and a growing, pulsating drone is all that is needed to create a sense of distinct unease in the listener. 'Forest King' follows, an analogue pagan hymn that seems both ancient and of the future; organic and synthetic. 'Vision at Crail' is a thing of beauty, orchestrated keyboard lines and strings criss crossing each other to create a mini symphony that would happily grace Eno's 'Music For Films' or 'Ambient 4: On Land'; an album highlight in amongst some other serious gems. Finally, 'The Lamp' closes the album with slowly caressed chimes, angelic choirs and a sound that feels like it's coming from the cosmos itself. It is breathtakingly good and immediately asks the question as to why Morlock is not scoring the soundtrack to the next Ben Wheatley or Jonathan Glazer films.

This is an album that is more than the equal of any of Morlock's previous electronic treasures. Intricately and carefully composed and constructed, these songs are mini symphonies, requiems and black masses in themselves. It is truly exciting to think and anticipate what Morlock may do next, indeed it does feel as though we are living in somewhat of a golden and revitalised era for electronic music what with Concretism, Belbury Poly, The Equestrian Vortex, The Heartwood Institute, Joseph Curwen, Polypores et al. Klaus Morlock plays a leading and major role in this analogue revival and 'The Mirror And The Lamp' is an essential component of the genre. Seek this out now.

There is no digital version of this album so once these cassettes are gone, that's it. Check out a track from Klaus Morlock's previous album here for a sample of what's in store: