Helen Tookey and Sharron Kraus - If You Put Out Your Hand 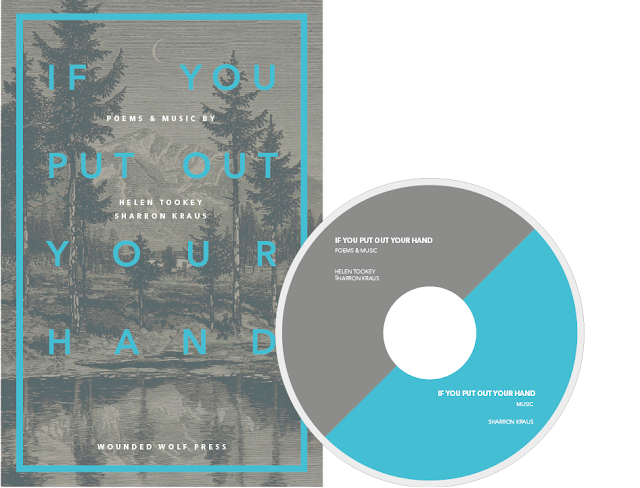 A collaboration between Liverpool based poet Helen Tookey and psych folk queen Sharron Kraus, 'If You Put Out Your Hand' is a truly beautiful and unique chapbook/ CD released on the wonderful Wounded Wolf Press label. All three elements suggests that this coming together of the written word and song will be something to be treasured; Tookey's inaugural poetry collection 'Missel-Child' was shortlisted last year for the Seamus Heaney Centre for 'Poetry Prize for First Full Collection', Kraus has a multitude of essential wyrd folk albums and EPs that come very highly recommended indeed and publisher Wounded Wolf Press is known for its high quality and esoteric pressings, ranging from CD and book editions of work by Xenis Emputae Travelling Band's Phil Legard to The Hogweed And The Aderyn's recorded output (if you don't know them do seek them out).

Influenced by 'the natural world and our ways of responding to it' the spoken word contributions on this album take their backdrop from rivers, hillsides and valleys as well as the landscape of nostalgia, memories and dreams. 'Unadopted' begins the album with quiet intent, Tookey's voice perfectly framed by Kraus's reverberated acoustic guitar. This swiftly moves into 'Missel Child' and its 'Wicker Man' style recorder and woodwind soundtracking the evocative and emotive opening lines 'The lady of the moon is in travail, her white face waxen as the missel-fruit…' Each individual piece is short but hugely effective and varied, additionally there is a sense of these verses being a series of connected vignettes. Kraus's accompaniment is spare and quite perfect, each note resonates all the more powerfully and gracefully for its simplicity and it never overpowers the text but works with it to conjure further images of old gods and moonlit trees. Occasional vocal harmonies emerge over picked strings to create a real sense of something ancient, pagan and of the earth. Tookey's verse is also pitched just right; it is descriptive but also immediate and particular highlights include the gentle gothic romanticism and blood letting of 'In The Rose Garden' (lovingly framed by Kraus's bucolic and bewitching guitar), 'Katherine' ('Katherine has been dead a week…') with its spectral, wailing fluid strings and the magical and sacred 'Rheidol Valley (Within A Semicircle)', expertly set to ever increasing layers of bouzouki, finger cymbals and haunted harmonies. Aficionados of Paul Giovanni's 'The Wicker Man' soundtrack, Faun Fables, Stone Breath and the rustic witchery of acid folk acts such as Forest, Comus and Stone Angel will find much to adore here.

Often spoken word recordings can be successful dependant on the mood of the listener and the familiarity of the text. Not so with this release, which serves and works in form as both poetry and music; the pieces simply flow like a stream, engaging but also with an ease to listen to and absorb. It may be the atmosphere that the interplay and weave and weft of both music and word helps to create, but this is a captivating and entrancing album which can be listened to as just that; an album. You can almost feel the breeze on your skin, the glow of the summer sun descending and the distant wail of sea birds as you close your eyes and let what you hear blanket you in something that is of the natural world, not of the bluster and noise of city life. This is hypnotic, essential, occasionally (and pleasingly) disquieting and ultimately affirming work; these pieces are filled with breath and with life.

The accompanying book is also a thing of beauty, featuring Tookey's texts side by side with some lovely woodcuts and illustrations. As an overall package 'If You Put Out Your Hand' is one of those special and unusual finds that do not come along particularly often. Already selling out quickly, this is a must have. Seek it out now here.