Here's some more listening for all you psych fiends out there:

Cold Sun - Dark Shadows ( Recorded 1969, Released 1989 )
Acid spiked garage psychedelia with creepy organs and a distinctly unsettling atmosphere. Another excellent texan band, these guys face the inevitable 13th Floor Elevators comparisons but also share a sense of discordant menace and unease with the likes of the Velvet Underground at their most avant garde.

Dungen - Ta Det Lugnt ( 2004 )
An excellent Swedish outfit, Dungen have produced a stunning back catalogue, out of which this is the best place to start. With choruses to die for, they effortlessly evoke the melodic magic of vintage late sixties Beatles, but approach things from a far more adventurous angle with complex instrumental passages that owe a lot to prog rock and jazz. Check out Panda and you'll be won over immediately. BUY IT

Mighty Baby ( 1969 )
Formed from the ashes of excellent mod pop outfit the Action, Mighty Baby have been rather unfairly written off as a Brit Grateful Dead, but they have a strong identity of their own especially on this, their debut. A pleasing rural psych album which admittedly does show a San Francisco influence, it features some nice acoustic guitar and fuzz guitar moments and some great communal harmonies. Opener Egyptian Tomb shows them at their best. BUY IT

Espers - II ( 2006)
Amazingly atmospheric psych folk, most obviously influenced by Comus and Pentangle. Some of the slower, moodier tracks especially Children of Stone hint at some previously unsuspected stoner - folk hybrid that sounds like something Kyuss fans would listen to on a Sunday morning. Lots of great fuzz guitar with unrivalled drone sensibilities too. Bloody great. BUY IT

Sun Dial - Other Way Out ( 1990 )
Amazing to think this was recorded in 1990 - there's not many records from that year that haven't got a horribly dated sound now, but this sounds like a totally convincing piece of psychedelic hard rock circa 1969. Lots of wah- wah guitar, some nice flute parts and clever vocal treatments help give it that ring of authenticity, the top tunes don't hurt either. BUY IT

The Dead's 1967 debut is generally not held in that high regard, with detractors pointing out that it doesn't give an accurate representation of their live sound. I couldn't agree more, and that's kind of why I'm so fond of it. While the Dead could be great live, they also had the tendency to wander off into ponderous noodly territory. For those with limited patience like myself, this set of mostly concise tunes is a godsend. Opener The Golden Road (To Unlimited Devotion) is their great pop moment, while Viola Lee Blues proves they could stretch out beyond ten minutes and stay focused.

Pram - The Museum of Imaginary Animals ( 2000 )
More psychedelic in approach than execution perhaps, this is Pram's most accessible release but is also reliably weird. Pram's best attempt at writing songs proper rather than establishing mood, this combines elements of half forgotten kids TV soundtracks with space pop ala Broadcast and Stereolab, but with a noticeably British sound, mainly due to some fine reedsmanship. The Owl Service is peerlessly creepy and one of the best pieces of music I've ever heard. BUY IT
You can hear a track on this cloudcast.

Country Joe & The Fish - Electric Music for the Mind and Body ( 1967 )
Awesome early psych masterpiece with fantastic organ work and excellent, stuttering lead guitars from Barry Melton. Their first album, and best by a long shot, this encapsulates U.S psychedelia in 1967 better than any other album I can think of.  Not So Sweet Martha Lorraine captures the Dylan sound of 1966 pretty admirably, while Section 43 sees them stretch out musically in the manner of Barrett era Floyd when they gave themselves some space. BUY IT
You can hear a track on this cloudcast. 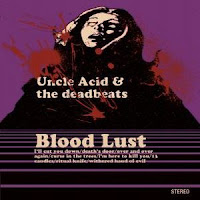 Uncle Acid & The Deadbeats - Blood Lust ( 2011 )
This is an excellent hybrid of heavy doom and dark psychedelia, heavily indebted to Black Sabbath but with an astonishingly druggy atmosphere that the Sabb's never hinted at. Fans of early occult rock like Black Widow will find much to like here, but thanks to some excellent studio trickery this admittedly quite derivative album comes off sounding pretty fresh. Uncle Acid does the best Ozzy impression I've ever heard and with layers of vocal effects sounds suitably evil. Great songs too, almost as good as anything on the first 3 Sabbath LPs, and with titles like Withered Hand of Evil, what's not to love? BUY IT

The Seeds - Future ( 1967 )
After the abrasive garage punk of their first releases, the Seeds fully embrace flower power with this release, but Sky Saxon's trademark vocal sneer is still firmly in place, making this one of the more unusual artifacts of it's time and a bit of a creepy listen. The C.A Quintet and 13th Floor Elevators come to mind, but this has more brattish attitude than either of them could muster. BUY IT

Broadcast - The Future Crayon ( 2006 )
Strangely for a collection of b-sides and rarities, I tend to find myself listening to this more often than Broadcast's proper albums. This probably has a lot to do with the fact that Broadcast are never shy about putting adventurous, experimental work on their albums, so this collection doesn't end up being a repository for failed experiments like it perhaps would for other bands. The usual Broadcast aesthetic is adhered to with Trish Keenan's hushed dream pop vocals, blazing drum work, eerie sound collage and general quirkiness all around. BUY IT
You can hear a track on this cloudcast.

It's a Beautiful Day  ( 1969 )
Excellent west coast hippie psych with some nice progressive folk rock arrangements, fantastic electric violin playing from David LaFlamme and some excellent harmony vocals. White Bird is the anthem that everyone knows, but the proggier instrumental Bulgaria matches it for quality, while Deep Purple enjoyed Bombay Calling enough to steal the main riff for their rather popular Child In Time. BUY IT

Amon Duul II - Yeti ( 1970 )
This is one of those magical albums that manages to perfectly toe the line between terrifyingly dark druggy psychedelia ( think a Krautrock version of live Volunteers era Jefferson Airplane ) with hugely enjoyable and totally accessible moments of almost pop-like bliss. This has the hooks that their earlier material lacked, but also the adventurous spirit that they started to move away from after this. BUY IT

The Doors ( 1967 )
The Doors first album sees them at their most psychedelic, and is probably the most consistent album in their impressive catalogue. Ray Manzarek's keyboard sound would launch a wave of second tier psychedelic acts over the next few years, and Jim Morrison's acid poetry found a wide audience with those not won over by the prevailing attitude of the summer of love. The End is obviously a psychedelic epic, but the lesser known End of the Night and the Crystal Ship are gentle psychedelic gems of the highest order. BUY IT

Buffy Sainte-Marie - Illuminations ( 1969 )
For those that are only aware of the gentle protest folk side of Buffy Sainte- Marie that penned Universal Soldier and the much covered Codeine, here's something to freak out about. A radically experimental album with swathes of raw psychedelic rock, early experimental electronica ala the Silver Apples, and God is alive Magic is afoot, an early Leonard Cohen lyric put to music. Thanks to Noel Gallagher for championing this one so aggressively or I would never have thought to listen to this. Good taste that man! BUY IT