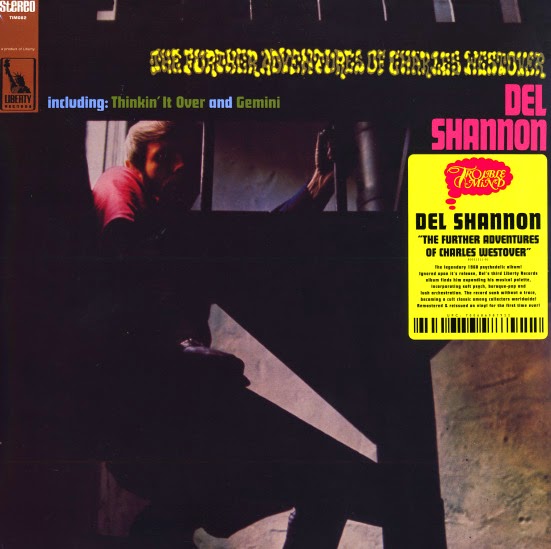 Del Shannon's late sixties renaissance went largely unnoticed at the time, but the work he produced in 1967 and 1968 is not only among his best, but among the best baroque pop of the era. After signing with Liberty Records in 1966 he cut an excellent album in London with producer Andrew Loog Oldham having high hopes for the sort of critical acclaim that "Pet Sounds" had recently achieved. Liberty quickly dashed those hopes by shelving the album, after several singles stalled, eventually releasing it many years later (to much deserved critical adulation) as "Home & Away".

Andrew Loog Oldham and Shannon's brief partnership ended there, but an artistically reinvigorated Shannon was back in the studio at home in America before too long with producers Dugg Brown & Dan Bourgoise, putting together 1968's "The Further Adventures of Charles Westover" (Shannon's birth-name in case you were interested). Where "Home & Away" had apparently seen Andrew Loog Oldham provide the impetus, "The Further Adventures of Charles Westover" saw Shannon take charge, writing or co-writing almost all of the material. It also broadened Shannon's horizons exponentially beyond the baroque pop trappings of "Home & Away" to incorporate psychedelia, gospel, and the hard, funky, swamp blues of Creedence Clearwater Revival and Tony Joe White.

Far from the bandwagon-jumping shenanigans of other rock 'n' roll era artists struggling to remain relevant, Shannon's material here has the scope and range to incorporate these influences without being buried by them. Del's wonderful tenor sounds impeccable in these lush surrounds, and his songwriting is at its strongest and most consistent. The baroque pop stylings of "Home & Away" are taken to new levels of excellence on the stunning single "Gemini" and stretched into new realms of swirling psychedelia on "Magical Musical Box" and "Silver Birch". But it doesn't end there. The earthy swamp funk of "Be My Friend" seems like a blueprint for what could have been a very successful next step in his evolution. And best of all are several moodier pieces which revel in their kaleidoscopic colours without sacrificing their sense of drama or grandeur; "I Think I Love You" with its minor-key sitar accompaniment, and the closing "New Orleans (Mardi Gras)" which builds to epic proportions. Unfortunately, despite a surfeit of great songs, "The Further Adventures of Charles Westover" failed to sell in quantities even remotely measurable against its obvious quality.

For an artist who is most well known for his 1961 hit "Runaway", it will be surprising for many to discover that his definitive artistic statements come via two later albums - one that his label didn't even deem worthy of release in 1967, and particularly, this commercially underperforming gem with a cult reputation. Chicago's Trouble in Mind have just released "The Further Adventures of Charles Westover" on vinyl - its first legitimate vinyl reissue ever, and an absolutely essential purchase for anyone with even a passing interest in psychedelic pop or baroque pop.