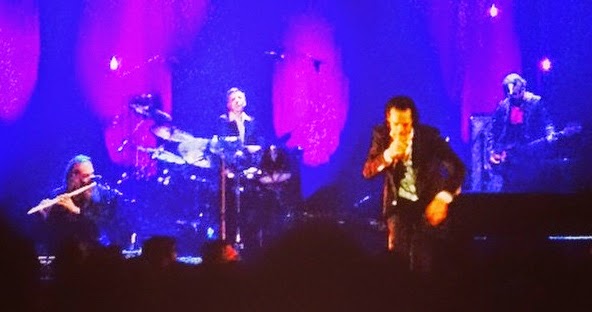 Last night's show (Nick's second of two in this venue, following one on the previous night) was pretty much picture perfect. Billed as a Nick Cave solo show, Nick was never actually on stage alone. Four key Bad Seeds accompanied him on most songs; Warren Ellis, Thomas Wydler, Martyn P. Casey, and Barry Adamson, with the spotlight shining on Nick alone for the occasional solo piano track performance.

I've seen Nick before with a much larger Bad Seeds ensemble and in comparison this stripped back approach really allows the songs to breathe, highlighting the intensity of Nick's vocal performance. And that vocal performance was fantastic; I can't imagine that he's ever sounded better. Unlike the majority of his peers, Nick's vocals are getting better and better with every passing year, aiding him in picking out subtle nuances that allow new arrangements of classic material like "The Weeping Song" to shine. Whether roaming the stage like a serpentine preacher, or perched at the piano, every second of this performance saw him consumed by the quiet intensity of his songs, which made his warm and appreciative between song banter even more surprising.

And despite the solo billing, Cave's conspirators were much more than just a faceless supporting cast. Warren Ellis remained seated throughout, in stark contrast to the barely restrained energy of his performance on a myriad of different instruments. Thomas Wydler's work behind the kit was exceptional, whether subtly caressing the cymbals with his brushes, or providing a fluent barrage of snare and crashes - particularly effective on "From Her To Eternity" which has never sounded tighter than here. And Martyn P. Casey and Barry Adamson's work on bass and keys respectively provided that dangerous, slinky groove which is the key component to the Bad Seeds sound.

Excellent selection of material too. Plenty of early stuff with "Jack the Ripper" and "Up Jumped the Devil" bringing the house down, as well as a smattering of 'hits' - notably a rousing "Red Right Hand". But it was the slowburning "Push The Sky Away" which provided the most riveting diversions; "Higgs Boson Blues" built to nearly unbearable levels of intensity, while Ellis exploded into life with a life affirming noise solo to help the crescendo of "Mermaids" reach it's apex. And "Push The Sky Away" itself closed the show out - the fifth encore - with it's brooding keys striking a perfect balance between introspection and the hint of menace.