Andy Wade "Fix It Till It's Broken" 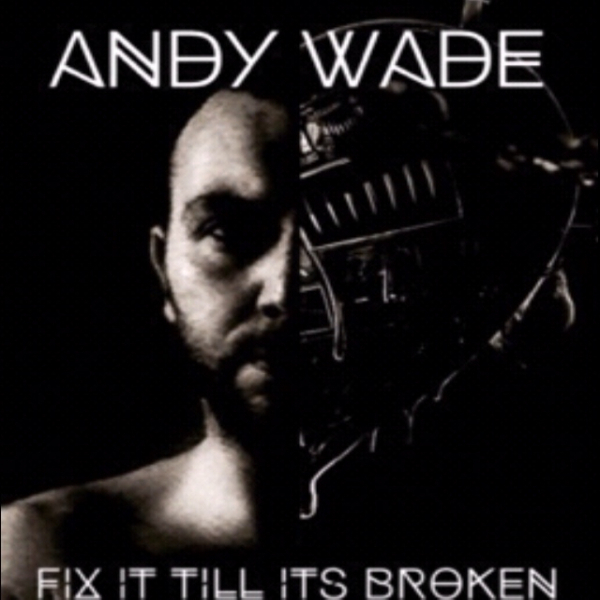 Andy Wade (brother and collaborator of psych masters Dodson And Fogg's Chris Wade) follows up his impressive debut 'Pushing Senses' with this new release which is veritably bursting at the seams with cosmic, psychedelic exploration and creation. One wonders about what went into the milk these two brothers had as infants but there is a parallel sense of the joy of making music in both their works; 'Fix It Till It's Broken' is no exception and demands to be heard.

The opening title track sets out the album's stall with thrillingly brutal bursts of squalling psych guitar and thudding bass, framed by the siren's wail and rise and fall of oscillating synths. It is an arresting start to a varied, creative and breathtaking album. 'Prowl''s unusual time signatures, Hammond flourishes and garage rock touches are exemplary, recalling Procol Harum and Bevis Frond in their barely restrained menace and intensity whilst 'My Beginning, My End' is a reflective and widescreen, banjo flecked ballad of loss and hope. 'Who We Were's fiery guitar sound and glistening piano runs are filled with more insistent hooks and memorable riffs than many bands manage in an entire album. With hints of both Warren Zevon and The Icicle Works this is classic rock with added twists and curious corners. 'Interlude' adds one of those unusual and unpredictable yet pleasingly left field forays with a pulsating electronic instrumental, like Kraftwerk with added explosive Neil Young guitar. 'Don't Take This Away' is a dramatic country-hued stomp, filled with reverberated guitar and piano stabs. This could easily have been the soundtrack to the new series of True Detective, its dark, traditional Americana sound perfect for soundtracking the shadowy Stateside underbelly. Next, 'Run' is a Kinksian/ Dave Davies styled paean with an exquisite guitar melody and hugely evocative waves of piano. For Wade there seems to be an almost endless well of musical creativity and invention, the album veers from thrilling, full on psych rock ('Dive') to carefully constructed and layered late night laments ('One For Life'). This album is one man's vision and you get the feeling that every note, every line is utterly genuine and from the very heart. This only adds to the exuberant and enticing nature of this release. One can't help but be enthralled and enraptured by the sheer talent and energy on display. 'Staring At The Sun' closes the album, echoed guitar and pensive harmonies giving way to thunderous Crazy Horse riffage and fuzz guitar. A suitably thrilling end to an album that virtually buzzes and crackles with sheer life force.

Available from the links here, this is a hugely successful and eclectic piece of work that drips conviction, life and honesty. Wade has created a second slice of psych rock wonder; join him there.