She "Wants a Piece of You" 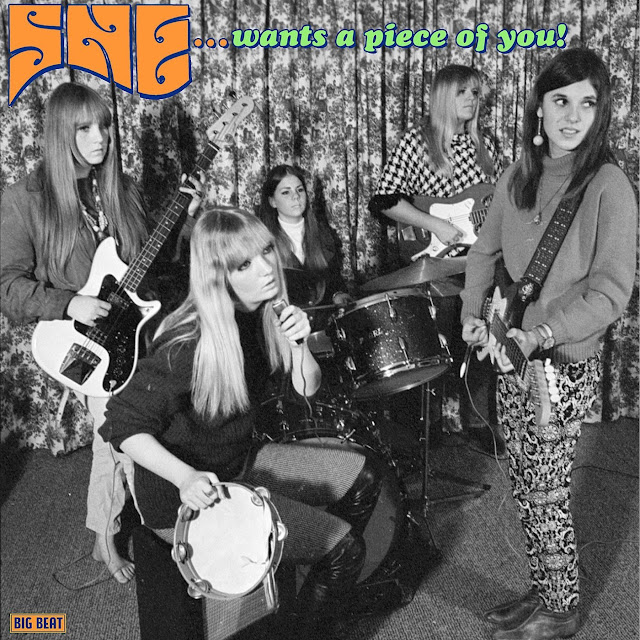 Californian band She were one of the few authentic all-girl garage bands of the sixties, writing and performing all of their own material without the interference of record companies, who typically drafted in studio sessioners to augment (or replace) amateur musicians. Left to their own devices, and without a promotional team breathing down their necks, the novelty of an all-girl band in such a male dominated field could be safely pushed aside, leaving She to concentrate on more important matters – perfecting a bunch of crude, garage pop anthems which effortlessly spliced punk attitude with glorious, girl-group vocal hooks.

The earliest performances here, dating back to 1966, and recorded under the name of The Hairem are primitive in the extreme, with the drumming being particularly crude, but even at this early point Nancy Ross’ mixture of innocence, and contemptuous bad-girl snarl was appealingly evident, with some great vocal hooks and Beach Boys influenced guitarwork.

Fast forward to 1969 / 1970 when the rest of these recordings were made, and The Hairem have morphed into She, evolving beyond their garage roots, without abandoning them completely. Nancy’s songwriting had become increasingly sophisticated, and the group’s musicianship had improved tenfold, with imaginative arrangements whose roots had spread from the garage to fully embrace psychedelia and bluesy folk-rock influenced by the San Francisco sound, with the addition of organist Karen Luther giving the band a spooky, Doorsy vibe at times.

But it’s Nancy’s prickly spirit combined with her gift for a memorable, sugar sweet vocal melody that elevate the likes of “Outta Reach” and “Feel Like Giving Up” to minor classic status, deserving of far more than their current cult following. Trimming six extraneous cuts from their 1999 CD for this first ever vinyl release (on pink vinyl), Ace Records have turned a pretty good garage artefact into something essential – a textbook example of less is more.

The new, vinyl version (as well as the original CD) is available here (UK/EU), and here (US).