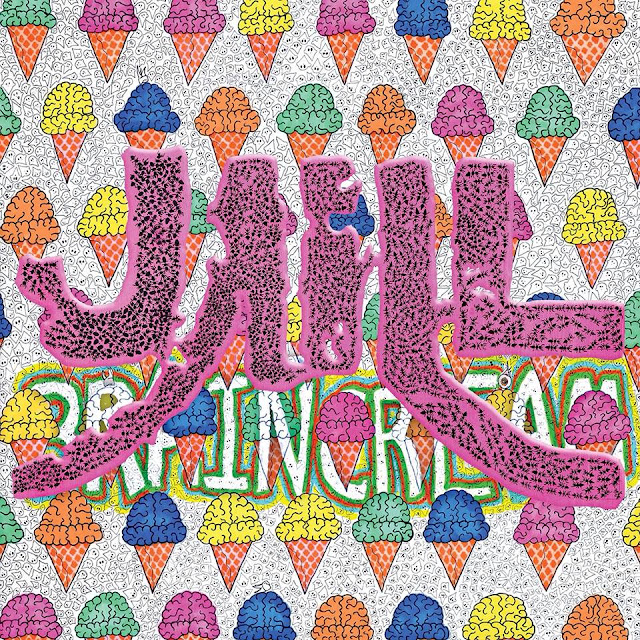 "Brain Cream", Jaill’s fifth album, is chock-full of infectious jangle pop which often toys with surf rock. This is an interesting genre for a band that is based out of Milwaukee, Wisconsin and full of depressingly melancholy lyrics. Lo-fi and a bit psychedelic, Jaill plays in a style comparable to that of Wampire and Warm Soda. While "Brain Cream" is quite similar to Jaill’s previous albums, it has a more polished and synth-dominant sound than its predecessors.

“Got an F”, the album’s focus track and single, manages to make the experience of failing sound like a positively joyous experience, thanks to the band’s sunny, buoyant sound. The listener is left unsure of exactly what the band got an F on, but can rest assured that it was certainly not this song, which is A+ material. “Getaway” is another superb track and has a great hand-drawn music video featuring the band playing nonchalantly while aliens, hot dogs, and other objects ranging from the absurd to the mundane scroll past them in the background.

"Brain Cream:, and much of Jaill’s previous work (especially their fourth album, "Traps"), reminds me very strongly of early of Montreal (think "Cherry Peel" – "Aldhils Arboretum" era) and The Apples In Stereo (especially "Fun Trick Noisemaker"), due to its slightly acoustic nature, keyboard synths, and whimsicality. This similarity is most apparent in “Symptoms”, which, with its precise combination of sliding synths and jangly guitar and its extremely Kevin Barnes-esque vocals makes the comparison undeniable. So, if you like Elephant 6, make sure to check this out.

Jangle pop as a genre is especially well suited for summer weather, and "Brain Cream" is the perfect summer album as it is fun, substantive, and goofy. On first glance, the album art appears to be a colorful assortment of ice cream cones with the band’s name written across them in pink lettering. On closer inspection, it becomes apparent that it is not ice cream but brains (thus, brain cream) on the cones and that the lettering of the band’s name is full of tiny ants, most likely coming to lick up the delectable drips from the melting brain cream. The initially idyllic appearance of the album cover is similar to that of the songs, which are upbeat and full of poppy hooks but ultimately dark, saturated by hopelessness and self-deprecation. It’s definitely pop, but with various oddities.

RIYL: Wampire, of Montreal, Warm Soda, The Apples in Stereo