Powers Of Blue "Flipout" / Brother T. & The Family "Drillin' Of The Rock" 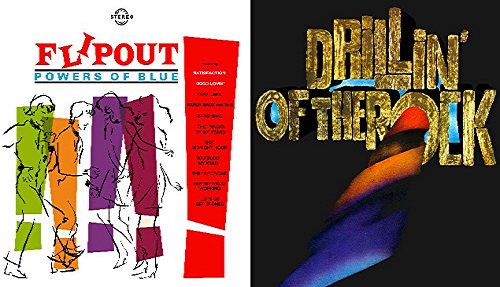 Following on from last week’s Gear Fab exploitation twofer is another wee gem from them, released at the same time. More exploito goodies here, with another two surprisingly consistent albums paired together.

Taking up the first half of this disc is 1967’s “Flipout: Powers of Blue”, a slapped together garage fuzz gem that is so obscure that it’s not immediately apparent whether one of the above is the ‘band’ name, or whether it’s simply a double barrelled title. Such trivialities are unimportant once the fuzz is warmed up though, as this one is a garage scorcher through and through. Arranged by Hugh McCracken (whose original “You Blow My Mind” is the highlight here, beating out some very familiar big names), this session is fully instrumental with a supple rhythm section propelling things along nicely. The vocal melodies are transposed onto some lovely sounding vintage fuzz guitar lines, often accompanied by a chiming electric twelve string. Not much to say about this one, except that it’s very much worth your time, and the clever multi-guitar arrangement of “Bang Bang” is a real winner, with an accompaniment that flirts not only with the desolate west, but also a hint of spy jazz.

Brother T. and the Family bring up the rear here, with their album “Drillin’ of the Rock”. Rather than a cobbled together group of session musicians though, Brother T. and the Family is yet another early version of Lucifer’s Friend, who we’ve also covered recently as Asterix and Electric Food. And there’s a thematic unity here which is unusual for an exploitation release, with “Drillin’ of the Rock” consisting entirely of startling rearrangements of traditional songs, most of which are completely unrecognisable except for their lyrics.

Under the influence of the U.K’s concurrent proto-prog / hard rock scene, familiar faves like “Barbara Allen” (here retitled “Lookin’ For Barbara”) and “Wayfaring Stranger” (“Stranger”) are twisted into totally unfamiliar shapes, with plenty of Hammond organ, and some great bluesy guitar work. Even a hoary old chestnut like “Jim Crack Corn” gets the treatment and comes up smelling like roses – in fact, it’s one of the highlights here. There are plenty of hooks – both vocal and instrumental – on display throughout “Drillin’ of the Rock” too, suggesting that this was more than the throwaway, spontaneous release than you’d expect given its origins. There’s only one misstep, the baffling Elvis-fronting-Procol-Harum tribute / spoof of “Third Degree”, but otherwise this is top tier early hard rock of the highest calibre.

Fans of U.K acts like Woody Kern, Atomic Rooster and the likes will be in for a very pleasant surprise here. An odd pairing of albums stylistically, but both offer plenty of highs.