Nine Questions with the Baudelaires 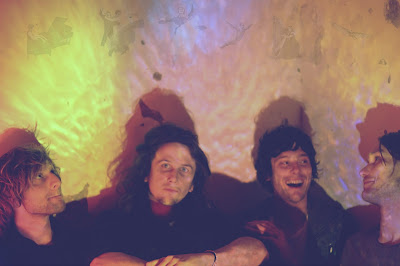 Thanks to Ryan from Melbourne psychedelicists the Baudelaires for submitting to interrogation for this outing of Nine Questions.

What was the first record you bought?
I shelled out my hard-earned pocket money to one of those old mail order album companies to have "The best of Aerosmith" CD delivered to the front door. "Sweet emotion", "Back in the Saddle", "Walk this way",all the bangers.

What was the last record you bought?
"Axis of Evol" by Canadian band Pink Mountaintops was recently gifted to me for my birthday.

What’s the one thing about you that very few people know?
I earned a black belt when I was about twelve and have never had to attempt to use it. Which is lucky as I’m not convinced that junior karate training is gonna get me out of even the least sticky a situation.

If you could record with any one artist, who would it be and why?
Well, depending on the logistics like, if we could jump into a time machine I would steer us back to 1989 and have Bez from the Happy Mondays shake some tambourine with us because, could you imagine! But I feel that if we flew over tomorrow he’d be a bit of a dick about it.

Who should we be listening to right now?
You can’t lose sifting through anything from Melbourne and around really! So much fine music coming out of this city at the moment; Sunbeam Sound Machine, Worm Crown, the Shabbab, the Tiny Giants, Dumb Punts, Sewer Side and of course as many UV Race tunes as you can possibly squeeze into any given day. If you fancy a taste from abroad then buy a White Fence album. His records sound amazing and he has the best songs. Another favourite are Sex Hands, a band out of Manchester that only write songs about the television show friends. Rachael, Chandler, Joey, the whole gang.

Vinyl, CD, digital or cassette?
Vinyl in the home, digital in the car and burnt cds at house parties..cassettes in 1991.

Tell us about your latest release.
Colour Mary is the first taste of our as yet unfinished and unnamed debut long player to be released later in the year. In the springtime maybe?

What’s next for you, musically?
In the coming weeks we will be retreating to a friend of a friend’s mum’s friend’s auntie’s house in the hills of the Mornington Peninsula for a four day (musical) bender, with the aim of having the album done, dusted and ready to be released through Off the Hip.