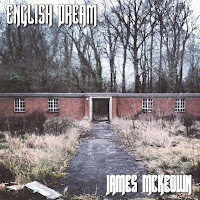 Our moribund Desert Island Discs section has been dragged, kicking and screaming back in to life by James McKeown (of solo, Hi-Fiction Science and Dead Pylons fame).
James is responsible for one of my favorite albums of last year "English Dream" (seriously, check it out here, it's magnificent). He's also got some more Krautrock flavoured goodies coming up through Fruits de Mers new Strange Fish offshoot soon, so keep an eye out for that Dead Pylons release.
But back to the task at hand, James was locked in a dark room until he could commit to the ten albums he'd need to retain his sanity if marooned somewhere that just happened to have a stereophonic device or a very small iPod.

I tracked this down in the mid ‘90’s when pretty much all I listened to was Psychedelia, it was a re-issue in a terrible cover (a weird sci-fi/fantasy castle scene ?!) from the now legendary ‘Revolver’ records in Bristol. I'm now lucky enough to have the 'Zombie Heaven' box set.
I love this album, it so well crafted, baroque pop with a light touch of Psychedelia. Quintessentially English on so many levels. Colin Blunstone’s voice is has such a hushed, airy quality to it, Rod Argent’s keys – Mellotron, Piano, Organ are sublime.
It really is the sound of a English Spring morning or a Autumnal late afternoon, sipping tea and walking through the leafy lanes of St.Albans in the late '60's (I like to imagine anyway!)

“Take off your shoes and feel the grass, lie back and let the hours pass”….

As you will see I am quite a sucker for late 60’s baroque psych pop and harmonies (The Left Banke are another massive favourite) and this album by the Curt Boettcher lead ‘supergroup’ is no exception. Some of it is twee beyond compare and borders on (Ch)easy listening, but there is enough balance with sheer beauty and groundbreaking studio experimentation to make it worth a listen. Boettcher is criminally underrated as a musician, arranger and studio boffin. This album also has the legendary status of being Columbia/CBS/Sony's lowest selling album of all time!! Also worth checking out are The Ballroom, Sagittarius albums and his solo material although none of it quite reaches this level of brilliance.

I’ve always had a massive crush on Kate Bush. I heard Running up That Hill when I was about 9 years old and felt real sense of eerie attachment . These days I would equate that feeling with Hauntology and Psychogeography – now that may seem a bit strong or over analysed but at that age your mind is a sponge and this went right in and lodged itself. Enough has been said about the mystery and legend that surrounds Kate Bush, but specifically Hounds of Love is the perfect example of intelligent pop. Hooks, melodies and also really off the wall experimentation – for example, the Ninth Wave section - for such a mainstream, essentially commercial album is pretty off the wall -  and once again, very English!

"Hey baby! come on in and help yourself to my soul"

I was a fan of Pink Floyd since seeing the Delicate Sound of Thunder concert on TV around 1988. I had always had a vague (foggy) notion of the name which intrigued me but seeing a portly David Gilmour and a host of mullet headed middle aged men with a crazy light show really did it for me. I loved the Storm Thorgerson's 'cod psycology' artwork and the general air of 'something is a bit weird and different' a head trip - which I didn't really understand at the age of 12. They are still my first love and all time favourite band - like my musical football team - even though the Syd years are hip and post Animals is all a bit half baked, I still love them. This preamble is a means to explain that I have read just about every book or Mojo special about them and thus I came to learn of a man who invented himself, who was a living breathing, modern day Syd Barrett. Robyn Hitchcock.

So I took a gamble on this album and on first listen was disappointed that it wasn't off the wall early floyd, it was closer to Nick Drake in a tube station. After many plays it has grown to be one of my most cherished albums and I have a large collection of Hitchcock's output. - See also The Soft Boys! - He is whimsical, Pythonesque, raconteur and a bit like a less obvious Vivian Stanshall. I met him with Peter Buck after a gig in Bristol a few years ago and got him to sign a copy of Ole Tarantula. Eye has a handwritten/drawn cover and when he signed my album I said "Wow! the Robyn Hitchcock font" to which he replied "Its just my handwriting"

"Spirit of Eden has not dated; it's remarkable how contemporary it sounds. It's the sound of an artist being given the keys to the kingdom and returning with art." Alan McGee 2008

Beautiful. To those who know, this album is the equivalent of being a member of the Freemasons. A nod, a secret handshake and sense of knowing. Such a special album and the mystery and journey that the band went on to get here is all the more intriguing.

Spirit of Eden recording engineer Phill Brown's book "Are we Still Rolling" talks of music being "recorded by chance, accident, and hours of trying every possible overdub idea." of intense sessions with studios in near darkness and the clocks and watches removed so that everyone lost sense of time and became lost and entranced by the music. It's influences range from Miles Davis, John Coltrane, Béla Bartók, and Claude Debussy and are about as far removed from the Duran Duran synth band they arrived as.

Music can be useful in many ways and whilst it seems a portentous statement, this should be regarded as a spiritual experience.

“The Angels of Ashes, will give back your passions, Again and again”

Whilst I love Tilt, The Drift and what I have heard of Bish Bosch I would class those albums more as works of art that you pay a visit to, reflect on and then return to again when the time feels right or you want to be moved, amused, shocked or need to pay a visit to the outer reaches of abrasive tonality. In short, it’s not an everyday listen in the same way you may enjoy a film several times, but it wouldn’t feel right to watch it every day.

Again in the same way that Talk Talk’s latter day output is nothing like their genesis, here we take the reverse journey.

The thick fug of late ‘60’s studio session musician professionalism hangs over this recording. Yet it is anything but stale and feels like a warm and accessible journey. Lovely big upfront clicking ‘60’s bass, big sweeping strings, plucked harps and nylon stringed guitars combined with Scott’s poetry noir, croon-a-thon make this an absolute jewel in the canon of Noel Scott Engel. It failed to chart.

If anyone balks at the proposition of a concept album, conjuring images of Torpid Tales from Topographic Drudgery play them this. At just under 28 minutes this is a sweet breeze of a ‘concept album’. Stylistically close to Scott 4 yet with a almost ‘post –punk’ aesthetic in places (particularly noticeable in the guitars on the title track – played by Alan Parker who also played on The Walker Brothers No Regrets). It's sexy and sassy, hypnotic and tidy all at once.

I first heard the funky/clunky bass loop from ‘Melody’ used as a sample by Massive Attack on ‘Karmacoma’ so there is a nice, if somewhat tenuous, Bristol connection too.

The lush, deep string and choral arrangements were composed by Jean-Claude Vannier in collaboration with Gainsbourg which really work to either stab in dramatically or deftly float over the top of the dry rhythm section. Gainsbourg’s near spoken delivery provides a wonderfully strung out storytelling rap to Jane Birkin’s coquette sweetness despite the fact that she’s just been knocked off her bike by a miscreant Frenchman.

That's a fair bold statement but a very fair one.  Everyone knows, loves and namechecks the Kosmische Klassics Can & Neu! but Harmonia - basically being Cluster + Michael Rother for me always feel a bit neglected. In the days before the internet I found out about these obscure Krautrock bands through Julian Cope's Krautrocksampler in which he includes Musik Von Harmonia in his top 50 (and rightly so)

This album fits passive listening as 'Ambient-rock' or immersive engagement and is a real trip from start to finish. Michael Rother's guitar is clean or razor-like but never lacking feel and precision. Mani Neumeier of Guru Guru is drumming and captures perfectly the Klaus Dinger Motorik Apache beat - it's in the blood for these guys - see also Michael Rother's 'Katzenmusik' where Jaki Zeibzeit's minimal drumming fills out the bass parts of this beautiful, melodic, instrumental guitar music.

I once shook hands with Michael Rother after watching a 'Harmonia' show with him and Mobius performing. He was very unassuming, spoke perfect English and was impeccably polite. A great player, a real guitar hero.

"The melodic genius of Vini Reilly"

Life is an unfair business. Vini Reilly's lack of millions and rock star credentials are essentially a trade off for him being one of the greatest ever guitarists in a Mancunian/Hacienda version of the Robert Johnson sell-your-soul-to-the-devil-

at-the-crossroads-pact. I've already express my love for The Pink Floyd and David Gilmour's string bending, rooted in the blues is a rich, thick double cream of sound. Vini is the polar opposite. His thin, bony hands chime and pick the most heartbreakingly melodic phrases you could ever bless your ears with. Martin Hannett's production whilst purposely cold and detached captures Vini's sound perfectly "...he more or less got sounds for me that no one else could understand that I wanted. And he understood that I wanted to play the electric guitar but I didn't want this horrible distorted, usual electric guitar sound and he managed to get that."

I saw Vini and The Durutti Column live once in Bristol and it was a profound, cathartic and spiritual experience for which I can only thank Aidan Searle and Jeff Green for being my post-punk mentors. If push comes to shove - Vini Reilly is my favourite guitarist of all time. Such an inspiration.

"We will lie back, on a pillow of the whitest snow, and the silence we were promised, will engulf us"

David Sylvian - The most beautiful man in the world, yet so much more than just a pretty face. This is an album I return to time and time again. It's steered me through all kind of emotional turmoil and serves as a perfect lament to the human condition. Recorded in 2005 with his brother Steve Jansen (also of Japan) This melds high Art-Rock, fragmented, skittering electronica (from Burnt Friedman), jazz, pop and introspection. Coming off the back of Sylvian's improvised and experimental 'Blemish' this feels like a return to pop but with all the weight of a war-torn world, a personal life in crisis and worn emotions.  There are subtle hints of the final Japan project the 'Rain Tree Crow' album but this feels contemporary, yet timeless. Slowcore, melancholic and companion album to No-Man's 'returning Jesus' of 'Schoolyard Ghosts'.