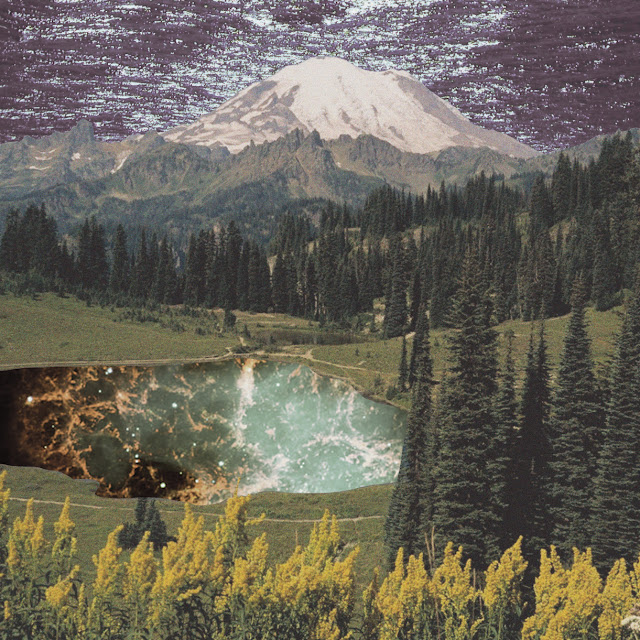 Sheffield's Evil Hoodoo label follow up their excellent first release from 39th & The Nortons (reviewed here), with this gargantuan behemoth on limited edition cassette. It seems almost perverse for such enormous, sanity-threatening sounds to be issuing forth from the smallest and most innocuous looking physical music format known to man (it's also available as a download for those who aren't keen on unspooling tapes with biros).
I'm a late-comer to the Cosmic Dead - up until now I only knew of them as that band with the really cool name, and even cooler album covers (this one in particular, recently reissued on vinyl).
The recordings on "Inner Sanctum" date back to March 2011, and have been kept tightly under wraps since. You may be thinking that if these recordings were any good presumably they'd have been released at the time right? Dead wrong. Whether they were moving onto other things (which seems likely - they're pretty prolific), or simply being picky buggers at the time,  there is absolutely no reason that you shouldn't be listening to this right now - it's incredible.
Space Rock with the benefit of hindsight, "Inner Sanctum" has all the sonic hallmarks of "Space Ritual" era Hawkwind and it's kin, anchored with a metronomic Krautrock precision, all filtered through the dynamic spectrum and epic narrative flow of Godspeed, You Black Emperor or fellow Glaswegians Mogwai.
With four tracks spread over seventy four minutes, there's plenty of time for these glacial pieces to unfold with bassist Omar Aborida and drummer Julian Dicken laying down an insistent throb for the guitars and synths of James McKay and Lewis Cook to navigate around, which they do in an increasingly exploratory and trippy fashion.
They're an aptly named group - there's something distinctly otherworldly about the soundscapes they create especially on the likes of opener "Gustav Bjornstrand" where the caterwauling guitars are periodically interrupted by a lone, crackling voice, sounding like a lost transmission from a distant, long dead star.
And while they often work at the noisier end of the spectrum, closer "Hello SATAN" demonstrates that they have a more restrained and subtle side that can be called upon when deemed necessary, with Cook's memorable synth lines given more space to breathe.
Essential head music.

Stream or buy below.