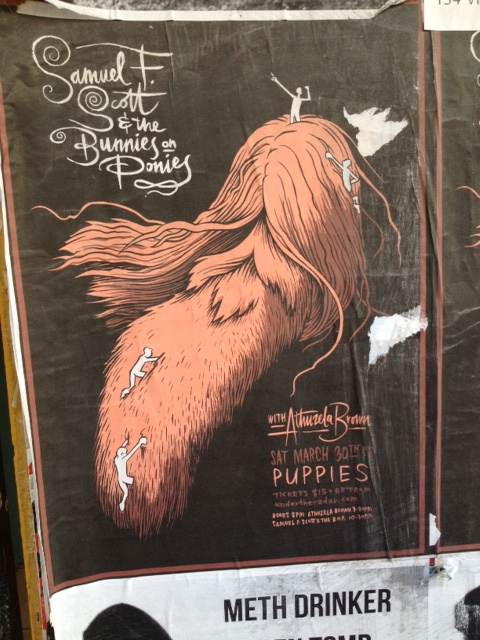 As attention grabbing names go, the Bunnies on Ponies is pretty memorable.
Strange then that this well established Wellington act have managed to maintain their position as a sort of best kept secret in New Zealand, especially considering Sam Scott's dayjob as chief protagonist in the Phoenix Foundation.
Bypassing the more cerebral, layered tendencies of the Phoenix Foundation, the Bunnies on Ponies offer Scott an outlet for more direct material with a greater emphasis on hooks than the Phoenix Foundation's more progressive tendencies allow. His first solo album features many of the Bunnies in a folkier element, but his second album "Straight Answer Machine" - the first to mention the Bunnies by name - is where the roots of tonight's sound lay.
Fortunately  for me, a weekend trip to Wellington to catch up with friends coincided with a rare live outting by the Bunnies on Ponies - their first in three years if Scott's stage banter is accurate (although I'm sure I saw a poster for them performing at a festival somewhere a week or so earlier.)
Currently a three piece consisting of Scott on guitar and vocals, Phoenix Foundation bassist Tom Callwood, and drummer Craig Terris, who seems to play with everyone in town, the Bunnies seem to cherish the opportunities for freedom that their more anonymous reputation allows.
Saturday night's set at Puppies demonstrated this well.
Athezula Brown provided admirable support with their Tiny Ruins-esque indie folk calming the not so savage beast of a crowd that had gathered, and providing an unlikely but successful counterpoint to the B.O.P's more animated and upbeat set.
Relying heavily on material from "Straight Answer Machine" (and why not? It's a top album), as well as some revamped numbers from Scott's debut "The Hunt Brings Us Life", the animated crowd were treated to a well paced set that set a rollicking pace that never really waned, and quickly scattered the group of tea drinking Uni students sitting in a circle in front of the stage.
Tom Watson's banter and second guitar were missed a little, but the extra space allowed Scott more time for exploratory guitar solos, a tendency he blamed on the influence of the recent Neil Young show (reviewed here). The over the top backwards guitar solos of "Llewellyn" proved particularly effective, making it sound even more like a prized "Revolver" orphan than the recorded version.
Before you start stroking your chin and getting all analytical though, I should emphasize that the general impression was not one of sophisticated trickery, but of rock and roll of a primordial nature.
You get the impression that Sam likes the chance to et his hair down and play some tuneful, unsophisticated rock and roll, an impression not dispelled by a couple of choice covers - Terris taking lead vocal duties for a spirited take on Del Shannon's "Runaway", and Scott making Tom Petty's "Free Fallin" sound a whole lot like one of his own tunes.
I was left wondering why these three play together so infrequently - they obviously have a ball doing their thing, and the crowd felt they same way.
And extra points for not having the pretense to go off stage before their encore.
So dear reader, the opportunity will probably not arise for you to see these fine gents on stage yourself, unless you happen to be in this neck of the woods, but if you have even the most remote interest in the Phoenix Foundation, New Zealand alternative music, or finely crafted memorable tunes you could do much worse than check out Sam's solo albums. They're both available here via Bandcamp.