Dodson And Fogg "The Call" Review 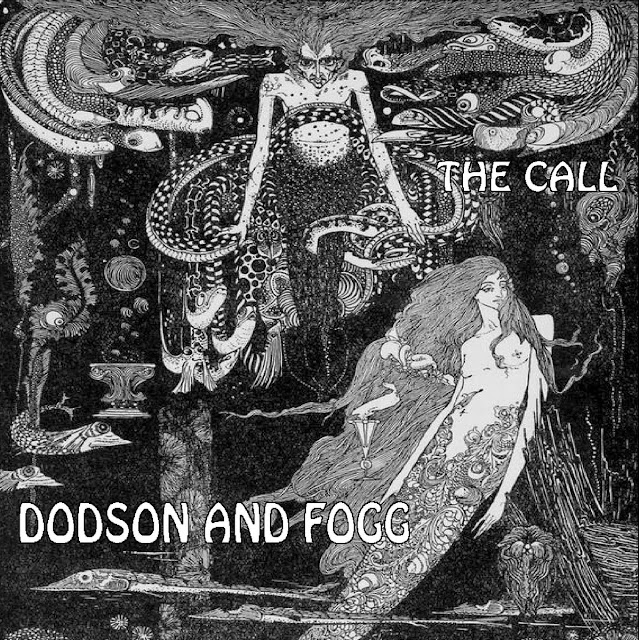 Dodson And Fogg (or multi-talented virtual one man band Chris Wade plus friends) have already established an enviable back catalogue of psychedelic loveliness with their first three albums. In rapid and prolific succession (this is their third album this year) comes their new opus ‘The Call’.
Opening with the almost pastoral ‘Mystery’, the listener is led gently by waves of bucolic guitar and a hazy summer vibe into the singular and multi-coloured world of Dodson. ‘Watch The Skies’ in turn is a Bolan-esque foot stomper with some ferocious guitar work. Indeed there is a distinct early T. Rex feel to some of these tracks; similarly the works of psych master Paul Roland also provide a reference point. However make no mistake, Dodson And Fogg are entirely their own proposition; witness ‘Suddenly’ which transforms from idyllic blissed out dreaminess to sitar laced 60s pop and back again. This record could conceivably have been recorded 30 years ago; its timeless quality means no-one would bat an eyelid if you suggested this was a rare find from, say 1972. ‘Late for the Party’ perhaps laments this sense of being out of time, with Wade’s jaded drawl and yearning fuzz guitar providing a melancholy Kink-sian atmosphere. The album itself sounds like the work of a large and talented band and it’s a testament to Wade that he brings this together almost single handedly, providing guitar, violin, flute, percussion and keyboards. However, as with previous Dodson albums, there are some rather special guests including Tree’s legendary singer Celia Humphris (who also featured on the earlier self-titled debut and follow up ‘Derring Do’), Chloe Herrington of Knifeworld on saxophone and Ricky Romain on sitar. In general a slightly frazzled and pleasing melancholy hangs over proceedings, as if this were soundtracking an enjoyably hungover Sunday. There is a curious English eccentricity and vision to the album and it is not overstating the beauty of Dodson And Fogg to fit them into the linage of Ray Davies, Kevin Ayers, Julian Cope, Luke Haines and similar uniquely English visionaries.
‘Nothing Can Come Between Us’ with its twinkling piano lines and upbeat brass section is perfect psychedelic pop; why this band is not gracing the covers of the mainstream music press is a mystery. Perhaps it is only time; discover them now so you can say you knew them back when. ‘It’s Not Time To Leave’ with its T. Rex harmonies presents yet another glistening example of effortless melody before the title track thunders into view, it’s fuzz guitar maelstrom providing a step up in gear. ‘Running Round In Circles’ brings things (appropriately enough) full circle, returning to the gentle nostalgia of earlier in a melancholy yet uplifting vein before ending on an explosive guitar freak out.
To these ears this is Dodson And Fogg’s best thus far. The amount of ideas in this album is staggering and there is more invention in these tracks than most bands manage in an entire career. Your record collection is a sadder place without this album. Trust me.