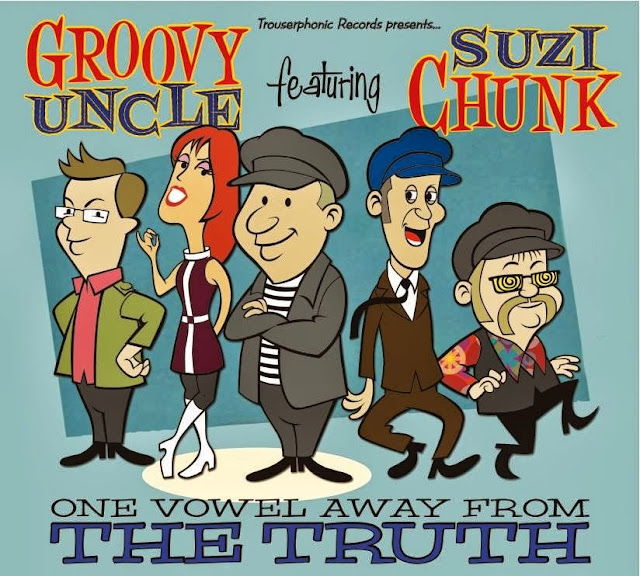 You've probably noticed by now that I've got a bit of a thing for Sandgate Sound Studios and the warm, analogue glow that emanates from within, and this latest release from Groovy Uncle is a welcome addition to the Thanes and Higher State releases I've reviewed recently. Whereas those particular releases hovered over 1965-1966 on the timeline, this release looks backwards slightly more, evoking the pre-psychedelic era where the barriers between beat, pop, mersey, r&b and good old fashioned rock n roll were being broken down, creating new colours for a generation that had been raised on greys and browns.
So while the core sound behind Groovy Uncle is built around the standard two guitars, bass, drums approach that EVERYONE was plying in 1964 (in the hope of becoming the next Beatles), chief Uncle Glenn Prangnell employs a diverse selection of players on other instruments to broaden the scope of his songs, without digging into anything that you wouldn't expect to be available during the implied time period.
Bringing in the marvelously soulful Suzi Chunk to join him on vocals is also a master stroke, and her Dusty Springfield vocal timbre adds another dimension to the songs she features on, whether providing sassy leads or joining Prangnell in big natural, vintage style harmonies.
Prangnell's lyrics also stick to character - more often than not barbed and satirical, almost like a more streetwise Ray Davies, preoccupied with such timeless subject matter that when social media (in the form of Facebook) is mentioned on the closing "Human Scaffold", it's like noticing someone wearing a Casio in a period drama.
Highlights are numerous, from "When I Saw Love" which sounds vaguely like the Hollies under George Martin's jurisdiction, to "Brand New Bag" with it's super cool staccato organ stabs, to the vibes laden lounge balladry of "Consider it Done" to the more raucous "I Know Where The Sun Shines", which flirts with the melody from "Summertime Blues" over a primitive, proto ska beat.
Perhaps best of all though are "Neptune Girl", a relentlessly catchy piece of sixties radio pop with a lyrical and extremely English sounding piccolo trumpet accompaniment straight out of Penny Lane, "Must Have" with it's big, driving horns creating an effortless Graham Bond cool, and the huge massed vocals that accompany "I'm Nearly Mad About You", which would have been a huge hit fifty years ago.
Hell, they're all potential hits.

Available directly from Groovy Uncle here, or from Amazon here.