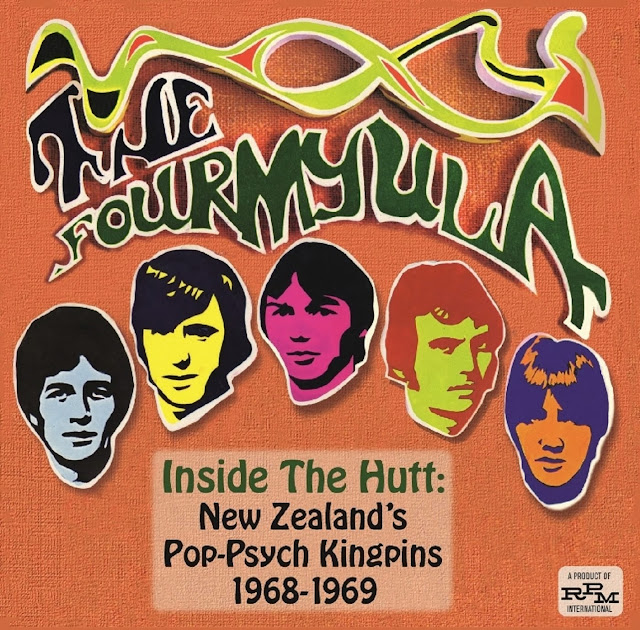 In 2001, members of APRA (the Australasian Performing Rights Association) voted the Fourmyula's "Nature" as the top New Zealand song of all time. And before you write New Zealand off as a tiny country (we are) with little to offer musically, let me remind you of two things; Flying Nun and the Finn Brothers.
For this pastoral psychedelic pop song to trump these heavyweights was most unexpected, but certainly not undeserved.
New trends were slow to reach New Zealand in the sixties, so it's not surprising that these 1968 / 1969 recordings from the Fourmyula sound in a lot of ways like the material that was originating from the U.K in 1966 and 1967 - a pretty fertile time. If Larry's Rebels were New Zealand's Rolling Stones, then the Fourmyula were New Zealand's equivalent to the Beatles - certainly in terms of popularity.
They were also one of the first New Zealand bands to insist on writing a substantial amount of their own songs.
These recordings (compiled for the first time outside New Zealand) chronicle the best material from the Fourmyula's first three albums and surrounding singles, including the full fruits of a session recorded in Abbey Road studios while the Beatles worked on "Oh Darling" in an adjoining room.
The debut single "Come With Me" / "Honey Chile" is still a killer - the former an elaborate flower pop anthem penned by group members, the latter a soulful psychedelic Motown cover with pleasing fuzztone guitar leading it out of the mod-pop terrain that you'd expect it to inhabit.
From this point the fivesome (there were four when they selected their name) progressed quickly. A rush recorded debut album was split between originals and soul covers ("I Dig Your Act" being particularly successful on this front), and proved immensely popular in New Zealand.
The follow up album was "Green B Holiday" - New Zealand's equivalent to "The Village Green Preservation Society" (but not as good, naturally), a concept album about traveling around New Zealand by van with much more of a flowery psych pop sound, and all original material that alternated between inspired and twee.
Also worth mentioning is excellent contemporary B-Side "If I Had The Time" with it's massive fuzz laden groove - the mark of a good compilation, pulling in quality B-Sides like this.
They then visited the UK and spent a day in Abbey Road recording the very "Whiter Shade of Pale"-ish "Orphan" with the mellotron used on "Strawberry Fields Forever" as well as the inspired percussion heavy single "Lady Scorpio".
The trip was an eye opener for the band (still all in their teens) and inspired the much more ambitious and earthy third album "Creation". A hugely creative and consistent album (as evidenced by the selections here) it is nonetheless dwarfed by "Nature", the lovely, mostly acoustic psych single that they're best known for - the sort of song that deserves to be talked about in the same hushed tones as genre favorites like the 23rd Turnoff's "Michelanagelo".
And that's where this exceptionally well compiled compilation ends. A fourth album with a heavy Led Zeppelin influence was recorded and shelved for forty years until it was released in New Zealand as part of a four disc box set of complete recordings "The Complete Fourmyula". As good as that set is, I'd argue that "Inside the Hutt" is likely to make a bigger impact on all but the most devoted fan, and does an amazing job of highlighting the diversity and growth of this much under-rated band.
If you're a fan of vintage U.K / Australasian psychedelia this is a no-brainer, an essential addition to your collection.
Oh, and drummer Chris Parry stuck around in the U.K and produced the first recordings of the Jam, and set up the Fiction label who released a ton of albums by the Cure. So there we go.

Or if you'd rather plump for the "Complete Recordings" you can get that here.