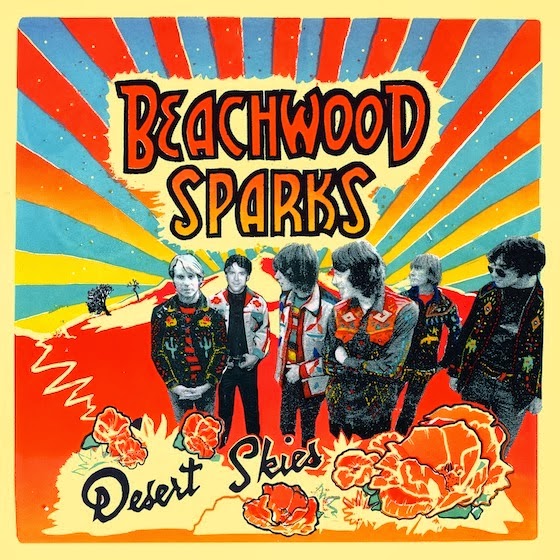 Back in late 1997 / early 1998 Beachwood Sparks were a young bunch of enthusiastic up and comers with a bright future ahead of them (not that they were to know that at the time). When Sub Pop eventually signed  them, these recordings (comprising their first single and the intended contents of a debut album) were shelved, the "Beachwood Sparks" official debut that we've come to know and love was released and that was pretty much that.
Fast forward to 2013 and the good folks at Alive Natural Sounds Records have readied these tapes finally for public consumption, and there's a whole lot here for fans and newbies alike to fall in love with.
Longterm fans may have heard the opening one-two of "Desert Skies" and "Make It Together" before as they were released in 1998 as their debut single, but their quality warrants more wide spread exposure.
"Desert Skies" was re-recorded at about double the tempo for the official debut in 2000, but the more relaxed pace here allows moments of quiet beauty that weren't apparent in that version to shine, backed by  a muscular country rock lope that sounds like the Jayhawks at their best. "Make it Together" on the other hand sounds like the best Big Star outtake you've ever heard - circa "Radio City".
A pretty good start then, and the previously unheard tracks that follow would have made a very fine debut indeed, so it's great for them to finally get their day in the California sun.
The original version of "Canyon Ride" makes the hushed version that eventually appeared on "Beachwood Sparks" sound anaemic by comparison, and the tracks that weren't deemed necessary to revisit later on match it head to head in terms of sheer quality and confident presentation. It becomes apparent immediately that these recordings weren't ditched due to lack of commitment on the performance front.
There's plenty of variety too, from the melancholy, harmony laden "Time", to the riffy Big Star meets Teenage Fanclub "Watery Moonlight", through to some much more psychedelic moments, notably "Sweet Julie Ann" which dabbles with both an exceptionally sweet melody, and plenty of backwards guitars and other trickery given high prominence in the mix.
And let's not forget epic closer "Midsummer Daydream", a storming jangler which I would imagine closed many of their sets of the time, it's precise tautness eventually consumed by a wall of free form psychedelic feedback that signals "good night" emphatically.
The CD and digital versions append another four tracks that all earn their keep too, but the eight song vinyl version is my pick of the formats - masterfully sequenced and perfectly satisfying without the other ephemera.