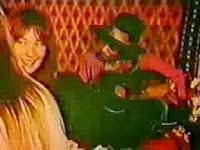 For those of you who wish they had the opportunity to hear Hendrix play a little more acoustic guitar, check out this blindingly great, off the cuff version of "Hound Dog" captured at a happening in a London apartment in 1968. If you thought Hendrix's acoustic playing on 'that' famous version of "Hear My Train a Comin" as featured in the original "Hendrix" documentary film showed him at the top of his acoustic powers then you ain't seen nothin' yet.
The sound quality before Hendrix starts playing isn't that flash, but once he's under way, its an extremely listenable, watchable and relaxed performance. Enjoy it while you can!