The Thanes "She's Coming Back To Me" Review 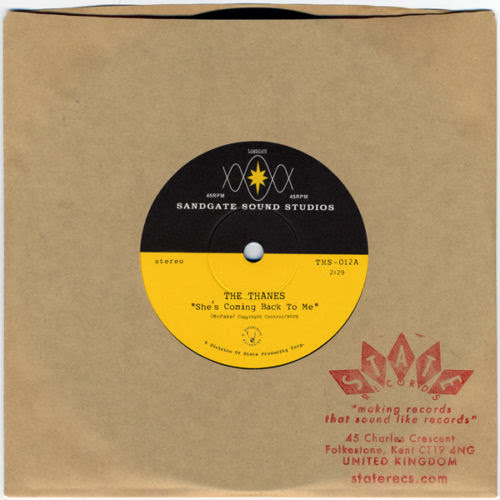 First, a history lesson; The Thanes are garage folk-rock royalty, and with a lineage dating back to the mid eighties, they've been around in one form or another for at least ten times as long as most of the bands that inspired them in the first place.
While it was accepted practice at the time for garage psychers to lean very heavily on their fuzz pedals, the Thanes' Lenny Helsing (also a Shindig! scribe) and company focused on a more authentic sixties jangle vibe that set them apart at the time and makes their back catalogue a far more enjoyable revisit than some of their contemporaries frustratingly dated works.
In the meantime they've weathered numerous line up changes, and in recent years have also spent time touring as the Poets, with original Poets members guitarist Fraser Watson and now sadly departed vocalist George Gallacher.
Which pretty much brings us up to speed here, with the release of this new 7" in the Sandgate Sound Acetates series (also home to the Higher State, Groovy Uncle and the Kumari - other thrillingly authentic vintage janglers with a permanently analogue state of mind).
It's the sort of thing that sounds like it could have been recorded at any point in their career; which is to say that it sounds pure 1966 through and through.
The A-side "She's Coming Back To Me" is a thrilling piece of garage folk-punk, all trebly pentatonic guitar riffs and snotty vocals with a ragaesque double time bridge and nasal, fuzz layered choruses.
Flip it over and the punkier elements are excised, in favour of a sweet jangly beat number "Love is Fading Away", originally acetated by the Poets back in 1965, and given a reverent and heartfelt reading here that acts as both tribute to the departed Gallacher and acknowledgement of their roots at the same time.