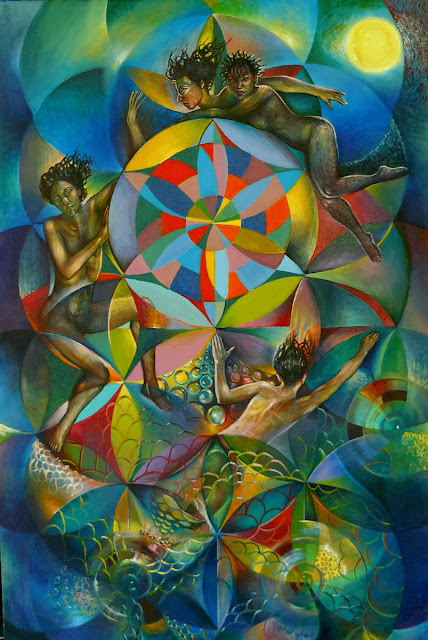 Another Sand Snowman album, the third in as many months, becomes available via the splendid Reverb Worship label. We are truly spoiled; Sand’s musical riches are (as previously) housed in lovely artwork by the man himself depicting a dream like sequence of floating women around a mandala. The beauty of the sleeve is disquieting; the Chagall-esque figures ever so slightly creepy and cloaked partially in shadows. The music inside is not dissimilar.
Indeed, openers ‘We Are Water’ (a glistening acoustic waterfall of a song) and pensive piano piece ‘Invocation’ provide enough twisted turns to disorientate and unnerve, leading the listener like an unwary Alice into a sinister and hallucinatory wonderland. The organ led ‘Spiralscape’ strays into gothic territory, its doom laden keys merging into the ghostly choirs and echoed guitar lines of ‘Otherness’.  This is a disconcerting yet curiously beautiful journey through the looking glass, Sand’s dream world shimmering and swaying in tone from acoustic prettiness to electronic howls of dark matter.
Less overtly psychedelic than previous release ‘Sleeper’s Hide And Seek’ and more edgy than the earlier ‘Autonal’, ‘Otherness’ works as a mood piece, each element and track flowing into the next to create a lysergic and surrealistic whole. There is a nightmarish quality to proceedings; ‘Hope’s Persistence’ with its off key xylophone and stalking guitar lines could well soundtrack one of Jan Svankmajer’s more demented and unnerving animated films and closer ‘Endgaming’ is not unlike Saucerful-era Floyd’s darker forays into deep space.
A mostly instrumental album, though with the wordless accompaniment of oft-collaborators Amandine Ferrari and Moonswift, this is best experienced in one sitting preferably in the dark and staring at the night sky. Sand’s music does not conform to your usual singer-songwriter middle of the road mundanity; instead he provides the ‘Otherness’, the unique and bewitching sound of a true artist.