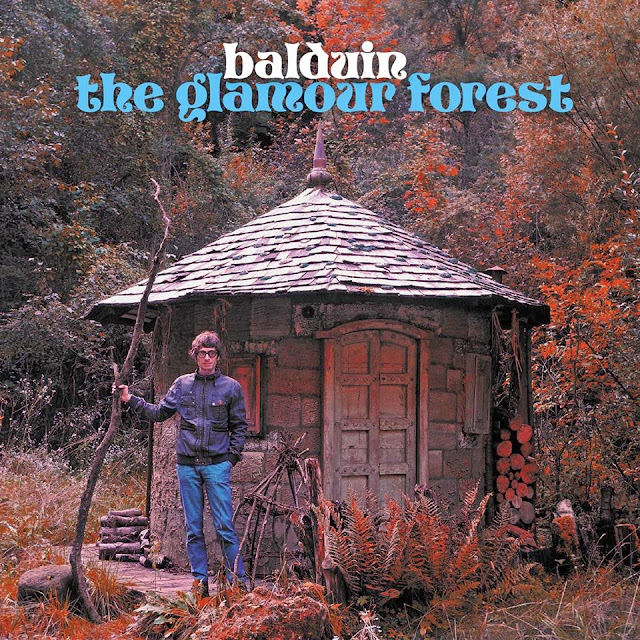 Following on from an excellent (and now sold out) 7" from Krauty pop types Klaus Johann Grobe, Sunstone Records have turned their attention to someone who's been on our radar for quite some time, Swiss alchemist of sound Balduin.
Balduin has been tinkering in his Wizard's Hut studio (he'd like us to believe that's it on the cover) for years with a large self produced back catalogue of psych-pop wizardry to show for it, a lot of which sounds like the sort of thing you'd expect to come out of such a fairytale bungalow with Santa's elves in tow.
"The Glamour Forest" is an exceptionally varied four track E.P of recent works, and the ideal introduction to his art.
The first thing most psych-pop scholars are likely to notice is the inclusion of a cover of U.K psych oddity "The Jabberwock" - based on Lewis Carroll's famous poem, and originally recorded by Boeing Duveen & Beautiful Soup in 1968 - now a ridiculously collectable single, and with good reason - it's completely unhinged. Balduin's version is tastefully respectful of the original - if thou hast not seen (or heard) the Jabberwock, then this is as good a way to hear it as any - but the originals that keep it company here are even better.
"Mirror Mirror" casts a shiny new psychedelic sheen over things that will have the Tame Impala crowd rubbing their hands together, but my favorite moments here are the more timeless psychedelic baroque pop pieces - "Hole in the Sky" with it's slowed down Motown beat, Kinksian harpsichord accompaniment and melancholy wall of vocals / mellotron is pretty lovely, and best of all "Waves, Stars & Moon" which starts as a simple acoustic guitar / vocal piece of baroque pop, before a graceful and subtly nuanced mellotron string section sweeps in gorgeously, heralding the arrival of something very special indeed.
Available soon on Sunstone Records - like the two facebook pages below to keep an eye out for pre-order opportunities as this will sell quickly.