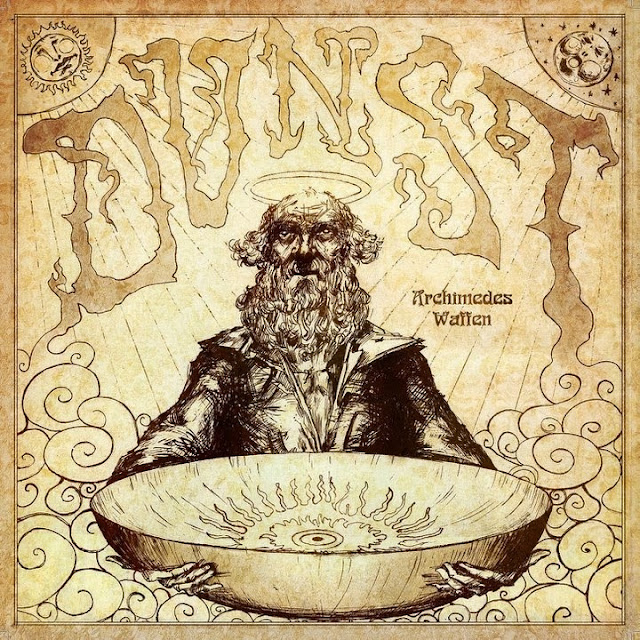 This could be an extremely brief review, as there is currently absolutely zilch about this band online.
Here's a few facts that I've been able to discern:
1. "Archimedes Waffen" is Dunst's second album, following a self titled debut in 2011.
2. It has an awesome cover.
3. Bass player Johannes Schulz should be familiar to you as Vintage Cucumber (I've reviewed some of his work previously here)
Facts over.
Dunst make good old fashioned (and mostly instrumental) heavy psych. It becomes apparent almost immediately that the star of the show here is guitarist Daniel Rexhausen who's versatile work alternates between heavily wahed lead breaks, blues based pentatonic riffing, the odd heavy stoner rock riff, and a whole bunch of more textural work, which at it's best (as on the swelling volume squalls of "Agathe & Saturnia") has moments that sound like a more structured, muscular and organless early seventies Floyd.
You'd expect a mostly instrumental album by a simple bass, guitar and drums lineup (with occasional vocals and effects) to get tired reasonably quickly, especially with tracks that routinely range from seven to eleven minutes in length, but these three have an excellent sense of dynamics which stalls any possibility of repetitiveness, and ensures that as a whole this feels more like a journey than a stop start collection of riffs thrown together to demonstrate their prowess, with a natural spontaneity and intuition that few collectives show.
And while the heavy riffing of tracks like "Hammerhigh" may grab your attention first, it's likely to be the more subtle tracks like "Kin-Shaq-King" which will reach furthest within you. Rexhausen's sinuous playing mostly bypasses the distortion pedal on this, allowing his guitar to breathe naturally through a nice clean tone with minimum gain, with what sounds like a layer of atmospheric synth (although none is credited) implying the chord progression.
Well worth a listen if you don't require vocals to maintain your attention.

Available below as a name your price Bandcamp download.