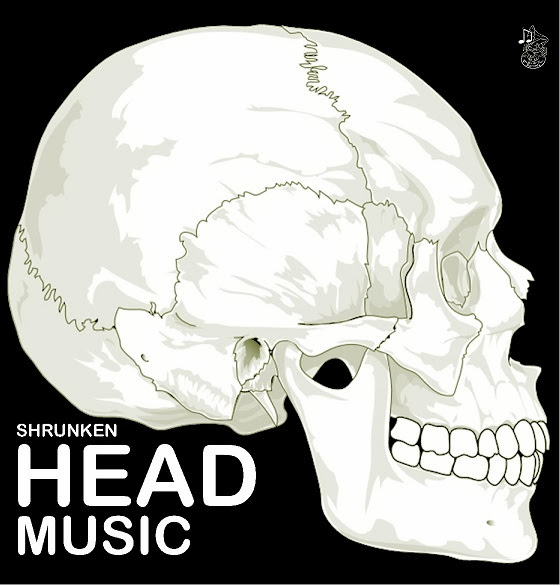 In early 2012 Fruits de Mer released "Head Music" to commemorate the 40th anniversary of celebrated, cerebral Krautrock label Brain, featuring covers of classic tracks by Kraftwerk, Neu!, Can and the likes as recorded by a host of the best artists that Fruits de Mer could sweep into their net.
But you probably know this already as you were either lucky enough to be in the know at the time and snared one of the 850 copies that went in the blink of an eye, or you've been scouring e-bay and prepping the next mortgage ever since.
Now I quite like tiny versions of things (who's seen Harvey Birdman?) so I was very pleased to discover that this month's batch of new releases from Fruits de Mer is spearheaded by "Shrunken Head Music", a double 7" E.P follow up which may be diminutive of stature, but is big on tunes, delivered with just the right balance between aural innovation and reverent worship.
It may come as some surprise to you that the founder of a periodical such as this would make this admission, but Brainticket have always scared the pants off me. I've tried listening to them numerous times, and have found it increasingly difficult to claw my way back to sanity with each subsequent listen. Good news then, that Frobisher Neck has appropriated their most accessible track ("To Another Universe"), trimmed away the excessive freakouts, amped up the kosmische factor and turned it into a quite lovely, lush mellotron-fest. Nice work, Mr Neck.
Neckst (sorry) on the agenda, Black Tempest extracts part of Tangerine Dream's epic "Rubycon" and distills it down into a pulsating sequencer showcase, layered with ghostly burblings and atmospherics that make this sound even more like proto-John Carpenter than the original does.
Russian prog-rockers Vespero prove their ambition next by taking on Faust's "J’ai mai aux Dents", and beating it into new and exciting shapes that respectfully acknowledge the route traversed by the original, whilst simultaneously ripping up the map and eating bits of it.
Lastly and most certainly not least (well, least Krautish anyway, but there in spirit!) we have Jay Tausig's astonishing recasting of Gong's "The Glorious Om Riff". With layers of spacious kosmische guitar overdubs cascading off of his vocal mantra, this has the drive of vintage Hawkwind, a comparison reinforced when that questing saxophone rips open the fabric of your mind, before coaxing the listener back to some semblance of normality when the spiraling vocals return.
You need this.

Pre-order this extremely limited double 7" E.P straight from Fruits de Mer here, or if you're outside the U.K visit Norman Records.