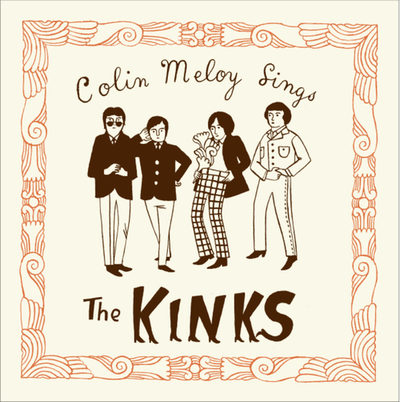 As both an evangelical fan of the Kinks and a lapsed but still curious Decemberists believer, I greeted the latest entry in Colin Meloy's "Sings" series with arms that were mostly wide open.
These E.Ps (produced exclusively to sell at solo concert dates) have showcased the diversity of Meloy's influences with covers of Shirley Collins and Morrissey (both of whom have an influence very apparent in Meloy's own music), and Sam Cooke (influence less apparent, but an entertaining diversion nonetheless). The one element that ties them together is Meloy's distinctive voice.
Meloy says he decided to cover the Kink's music after passing on other randomly selected albums from his personal library. "I drew five different records off my shelf at random and determined myself to cover one of those artists," he tells us via email. "They were: Nico, Quasi, Clannad, Kinks and Don Everly. Briefly flirted with the idea of Quasi - particularly the remarkable body of work of one Sam Coomes - but I found that his range is way too high for me. I'm not good on Gaelic so Clannad was out; Nico and Don Everly? Nah. So the Kinks it was!"
Ray Davies is a natural addition to the series and the selection of tunes here (all from the golden period of 1966-71) show just how much Meloy has learnt from Davies over the years. Indeed, his ode to the joys of cigarette smoking,"Harry Rag" (in both it's original version and the form taken here) sounds very much like a prototype for the general Decemberists sound, so naturally it's handled with aplomb, both reverent to the source material, and completely at home in it's new surroundings.
As is usual for the series, the arrangements are simple solo acoustic guitar and vocal pieces which suit the majority of them marvelously, allowing Davies natural storytelling and melodic gifts to shine through without the need for window dressing. Unfortunately on occasions where Davies' exceptional arranging skills are needed, things fall a little flat in this starker environment. "The Way Love Used to Be" may be one of Davies' most eloquent and engaging songs but without the melodic thrust of it's string arrangement it ends up as a fine lyric in search of a tune. Still, Meloy is to be congratulated for attempting to shine a light on an unfairly maligned album ("Percy").
The more upbeat tunes make a much more successful translation to this format; the aforementioned "Harry Rag", "Waterloo Sunset", "Days" and particularly "Do You Remember Walter" are effortless charmers that retain the freshness of the originals and fit Meloy's vocal twang like a glove.
I can't help but wonder who's next on Meloy's agenda.

"Do You Remember Walter" can be streamed here.