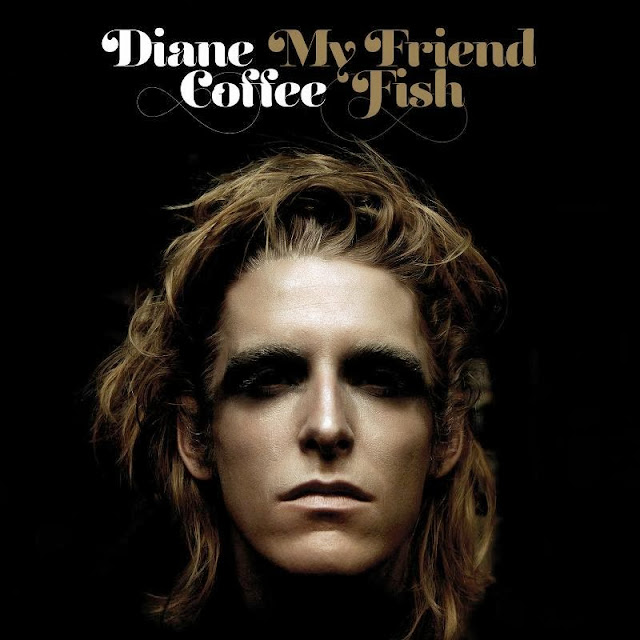 I'd already worn out my copy of Foxygen's "We Are The 21st Century Ambassadors of Peace & Magic" back in August when I discovered that Shaun Fleming (drummer for Foxygen) had his own solo project coming out under the moniker of Diane Coffee, so this is a much anticipated release for me.
In the meantime Jonathan Rado, one half of the main songwriting duo for Foxygen has put out a ragged and often impenetrable solo album that made my ears bleed and suggested that he'd saved his best tunes for Foxygen.
Fleming has no such problem, and his debut "My Friend Fish" comes close to reaching "21st Century Ambassadors..." heady heights. This is made all the more impressive by the fact that it was recorded in his apartment over a space of two weeks, while recovering from the flu.
There are traces of Foxygen naturally, but more often than not another D.I.Y bedroom recorder is evoked - Unknown Mortal Orchestra's Ruban Nielson.
"My Friend Fish" is a lovely psychedelic / soul / folk-rock hybrid that doesn't try to fit neatly into any particular box, instead following the nebulous ebb and flow of each song's requirements. It's easy to imagine Fleming tucked away from outside contact for two weeks, and becoming completely immersed in his own world - a world where it's completely natural for these disparate elements to coexist and thrive off of each other.
Opener "Hymn" is woozy, slow motion psychedelia, all wobbly organs and sweeping tremeloed chords pulled off with reverence and "Crimson & Clover" stylevintage charm.  A lovely and fitting start for an album imbued with more than it's fair share of drama, soul, big anthemic choruses (New Years) and on tracks like "Never Lonely", psychedelic funk.
And if there's a more satisfying closer to an album this year than "Green" I will purchase a hat, and eat it. As the end credits roll, it unveils a sort of Morgan Bluetown meets Four Seasons doo wop with a devastating falsetto chorus and a real visceral hook, full of melodrama and unwavering melody.
This my friends, is a winner.