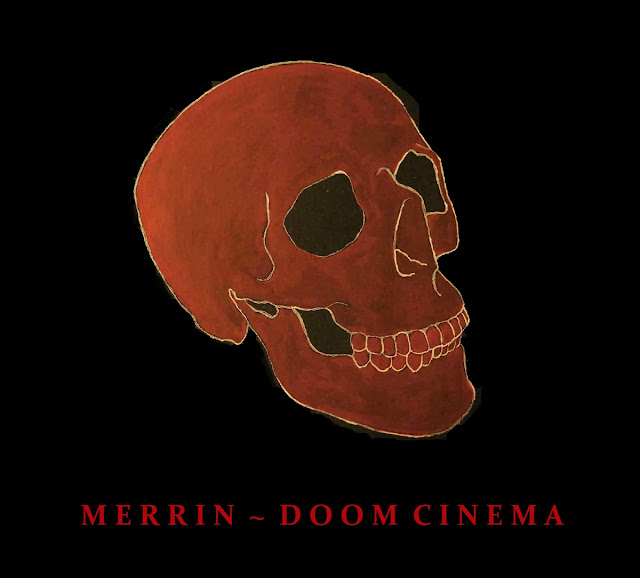 
Merrin, a mysterious UK collective (but mostly centred around multi-instrumentalist Chris Purdie) seem to have appeared almost fully formed from nowhere. Further research reveals that several releases have in fact appeared over the last eighteen months including an acoustic covers EP of movie soundtracks such as ‘The Running Man’ and ‘Phantasm’. This enigmatic approach befits the subject matter of their most recent EP, the appropriately monickered ‘Doom Cinema’, which they describe as an ‘exploration of dark music and the moving image’. Written to accompany three short forthcoming films and influenced by John Carpenter, Giallo, Southern US thrillers and straight to VHS late 80s horror movies, the tracks weave between creeping psych -dread and all out doom sludge.
The opening track ‘Plymouth Fury’ navigates between Om/Earth style doom laden instrumental passages and almost Floyd-esque guitar breaks. As befits the intention of soundtracking horror films, Wicker Man style acoustic guitars mix with tolling drums; the result is a pleasing mix that is both disturbing and exhilarating. There are echoes of Goblin’s soundtracks for Argento’s 1970s psychological horror films (such as ‘Suspiria’) although this writer also detect hints of post rock giants Godspeed You Black Emperor and nu-prog heroes Porcupine Tree, particularly in the scale of ambition and size of sound that is created. This is not a lo-fi production.
‘Cajun Swamps’ in turn begins with reverbed Godspeed style desert guitar which then builds into an all-out psychedelic fuzz guitarfest; organs compete with downtuned guitars and droning feedback in a monolithic wave of noise. The only criticism is that this all ends too soon; there is a sense of the epic in Merrin’s music that could easily sustain these tracks being twice as long and which would add to the growing feeling of menace that is ably projected here. Closer ‘Shakma’ is the most doom influenced track present, with hints of Sunn O))) and Sabbath-like riffing merging with some sinister sounding synths to once again create something both threatening and beautiful.

Released in December 2013 (though the download is available now) ’Doom Cinema’ comes in a uniquely designed cardboard foldout case featuring original artwork by Alex Small and photography by Parshin Pourmozafari. The accompanying films will follow in 2014 and will be available on VHS, appropriate given Merrin’s influences. The darkness awaits; switch the lights off, grab your popcorn and hide behind the couch - you know you want to.

Available through the Bandcamp link below: