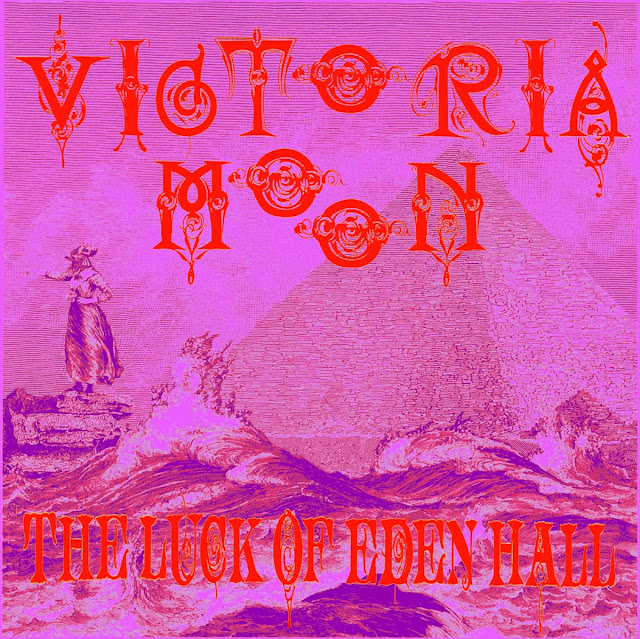 As baffling oversights go, the non-household name status of The Luck of Eden Hall must be right up there. Formed in Chicago in 1989, these chaps have built a sizeable back catalogue of gems that even the most uptight, tone deaf, besuited major label music executive would have to admit are hits in the waiting. The fact that these guys didn't have their pick of the major labels during the heyday of college rock vexes me greatly.
"Victoria Moon" is another chapter in The Luck of Eden Hall's extremely consistent story and contains everything I love about them; songs that combine dense and inventive neo-psychedelia with appealing and approachable indie rock embellishments that ensure appeal beyond 'genre' listeners, immaculate production flourishes, lyrics that enthusiastically embrace the colorful end of the psychedelic spectrum ("Sassafras Overcoat"), and effortless hooks (both instrumental and vocal) that most bands would kill for. Business as usual then.
They've toned back the buzzsaw guitars of their last album "Alligators Eat Gumdrops" a little and really centred in on the psychedelic details here, the title track in particular featuring some lovely mellotron and a heavily treated orchestral explosion ala the Beatles, resulting in a track that's halfway between the melancholy of "A Day In The Life" and the Smashing Pumpkins at their subdued but epic peak.
That in a nutshell is a pretty good indicator of The Luck of Eden Hall's sound - they throw in all the psychedelic tricks (phasing, backwards tapes - you name it), but their songs contextualize these period trappings into something much more contemporary - a thrilling alternative to their peers who often either seem to stick rigorously to the vintage rulebook, or add a whole bunch of reverb and shoegaze elements and called themselves new psychedelia.
"Zap" is another highlight (hard to pick highlights as The Luck of Eden Hall don't write filler), a concise effects laden psych pop gem with staccato snarework (these guys always get a great drum sound that invariably reminds me of Jimmy Chamberlin's crisp snare drum sound), a killer chorus and subtle "Good Vibrations" / "Mars Attacks" style theremin accompaniment. And while this may sound like the sort of detail that ensures a specific genre audience rather than widespread appeal, they have a way of making the most esoteric touches entirely listener friendly.
In short - it's been twenty four years people, where have you been? If you are yet to discover the considerable charms of The Luck of Eden Hall "Victoria Moon" is the place to start.

Available on CD or digital through the Bandcamp link below