We had a chat to Thomas from the Movements about their new album "Like Elephants 1" (in our top 50 albums of the year here) and Swedish psychedelia in general.

"Like Elephants 1" is a real change of pace for you guys. Was there a conscious decision to  make this album more psychedelic or is it just a natural progression of where your heads are at now?

Our music has just developed with ourselves. We have never tried to hang on to what we´ve done before. And for me personally this record isn´t necessarily more psychedelic, our space album is more psychedelic to me in a way. What I mean is that it is very hard to discuss what is psychedelic or not since that is very much a subjective experience. So to answer your question, it wasn´t a conscious decision to make a more psychedelic album, but I´m glad that you experience it that way.

Was there a specific point during the writing/ recording process when you realized that this was something else from what you normally do?

Ever since we decided to do this album the intention was to make something that was much better than anything we had recorded before.  For some years we were very restrictive with touring so we could focus on songwriting. When we started to record the album we had to work very hard to get the sound we wanted and when we finally found it we already were so into the process that we just kept on going and made two albums instead of one. We started to record these albums in 2010 and then we worked ourselves through it in various sessions. So it took quite a while. During the years we also learned a lot of recording and producing techniques so for the first time we really made the album(s) that we intended to do.

"Like Elephants 1" is the first part of a two album series. Has the second album been completed, and how did you decide which material to put on which album? 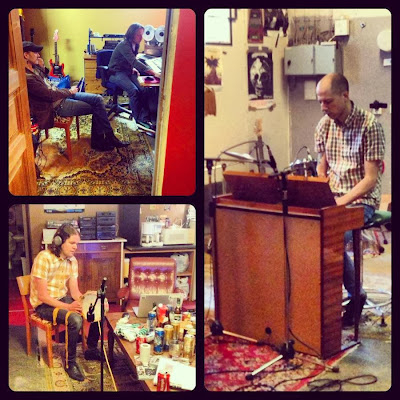 Part 2 is completed, I actually got the final mix and mastering earlier this week.
We have worked a lot at the flow of the music through the albums. Everything floats together, as you hopefully have noticed. The important thing for us is that every song fits in a good context with the other songs on each album. It was important for us to create strong albums and not just compilations of songs, and that the albums would create a whole, a kind of continuity, together. But the challenge was also to make songs that could stand on their own as well. We tried out various sequences of songs but at one point or another the albums just ended up creating themselves you could say.


The explorative passages on tracks like "Boogin" make me think of things like "Eight Miles High" - have you been listening to Coltrane and other jazz or does this influence come more from psychedelia for you?


Yes in fact, so we´re glad that you noticed that! The poly-rhythmic elements of jazz and its African roots has been a particular source of inspiration for us.
For us jazz and psych don´t necessarily need to be in contrast, for example we listen a lot to music like The Pyramids and Sun Ra.

Here's your chance to get the word out on other great Swedish bands - who should we be listening to (apart from you of course!) ?

Thanks for the interview!

You can read our review of "Like Elephants 1" here.