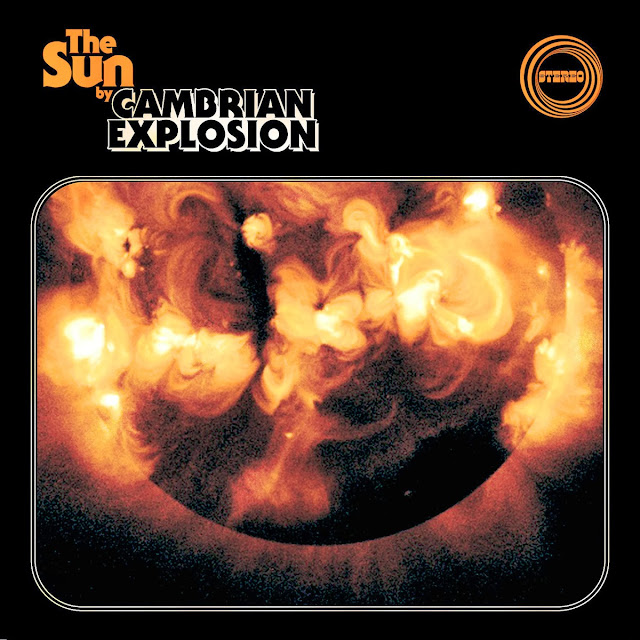 1. Geology. The rapid diversification of multicellular animal life that took place around the beginning of the Cambrian Period. It resulted in the appearance of almost all modern animal phyla as demonstrated in the fossil record.

2. Musicology. A Portland based jam rock outfit noted for it's diversification of elements traceable back to the 'psychedelic' period. Not recommended for fossils.

"The Sun" is this four piece's debut E.P, and it's an extremely confident first step. Combining riffy alternative rock with nebulous prog rock song structures, swathes of trippy psychedelia and huge ear tugging choruses, these guys have nailed it from day one here.
Opener "Umbra of Mind" offers an immediate crash course of this E.P's contents; monolithic alt rock riffery taylor-made for the Queens of the Stone Age generation, sinuous eastern scale keyboard leads, vocals with a distinct Mike Patton edge, and a huge, open space rock sound that leads me to assume that their jam space (where this was recorded) is not on this planet.
And there's plenty more where that came from with not a wasted second among the six tracks on offer here; the title track slows the tempo and increases the feeling of weightless spaciousness, with treated vocals and some massive guitar leads, while "Black Maven" introduces some falsetto, a stack of reverb and enough swaggering cock rock to send Mick Jagger back to his kennel, tail between legs.
There's a sustained feeling of hugeness here that most big name producers can't coax out of a major label band, and these four have captured it effortlessly all on their lonesome.
Buy it for that reason alone, or if you need another, because it is extremely bad-ass. You have been advised.

You can stream or download the album below on a Name Your Price basis. They're saving up for a tour van so it's in your best interests to pay something for it, as I bet these guys would slay you live.
Vlinder Tapes have also released an extremely sexy cassette version which you can purchase through this link.