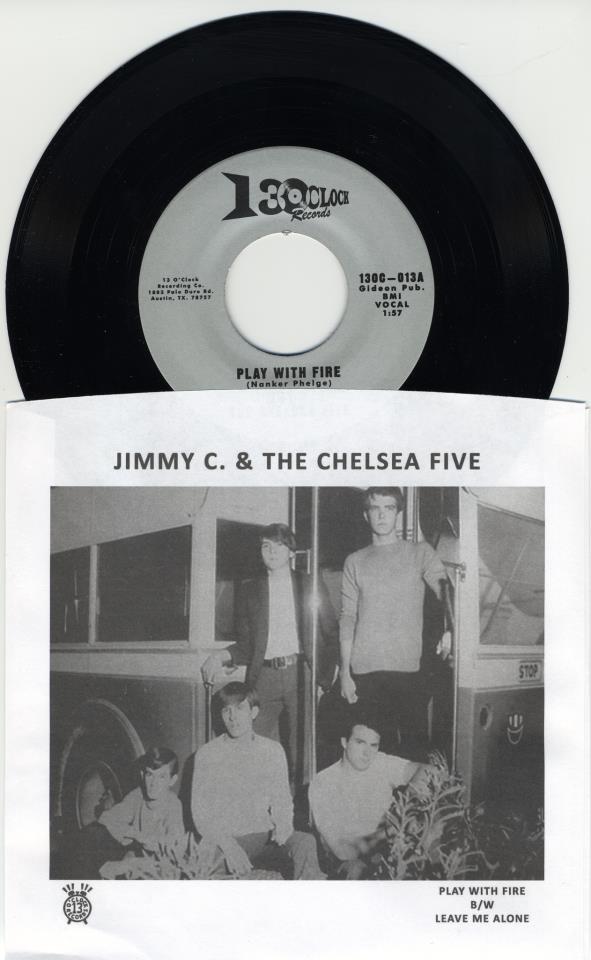 Small Texas label 13 O'Clock have carved an impressive niche for themselves, specializing in records that sound like they should have been hits in 1966 and 1967 (The Higher State, Flight Reaction etc. ).
They've taken this approach one step further now and dug up their first reissue - and not surprisingly considering label boss Brian Smith's reliable ear, it's another shoulda been hit - except this time it actually does come from the era it evokes (some reports say 1965 although the label claims 1967).
Jimmy C and co managed just the one single but it's certainly one that deserves a far wider audience than it has so far received.
The A-Side of this reissue is a cover of the Nanker Phelge number "Play With Fire". Stripping the Stones version of all it's baroque Andrew Loog Oldham hardpsichord flourishes and upping the tempo proves just what a top song this is (if there was any doubt?). A propulsive bassline and appealingly jangly guitars set a solid garage bedrock for Jimmy's surprisingly direct vocal - a very nice comparison piece to Mick's petulant brat vocal on the Stones much more sophisticated, but not necessarily better version. It's a great example of garage reinvention. It doesn't even matter that Sammy Simmon's drums are so far back in the mix that it's hard to tell whether he's playing a kit or just a tambourine.
The flipside is "Leave Me Alone", a band original, and a more cracking unknown proto garage punk nugget you're unlikely to find. Lyrically it's your standard young love gone wrong, boy gets angry piece, but lyrical sophistication is not what one should seek on a record such as this, and the garagey bluster on display here (seemingly indebted to Love's version of "Hey Joe", although obviously this wouldn't be possible if this is a 1965 recording) is more than enough to satisfy this avid garage fiend.
I'd love to see 13 O'Clock dig up more local Texas rarities if the quality can match these sides. Top work.