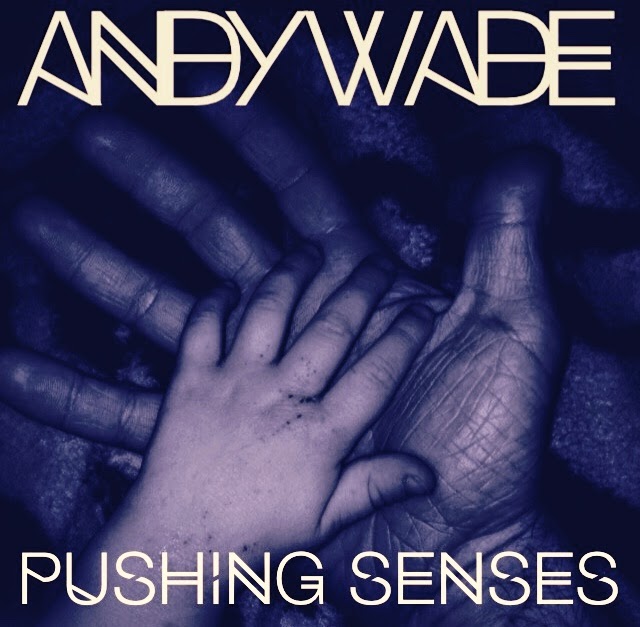 What runs through the blood of the Wade family? Judging by this debut effort from Andy Wade (brother of Dodson and Fogg's Chris Wade) it is some mysterious psychedelic musical elixir. The two brothers released a splendid joint album, 'Rexford Bedlo' (reviewed elsewhere on these pages) earlier this year and, in not dissimilar fashion to his brother's Dodson's output, Andy proves equally prolific in following this up only months later with 'Pushing Senses'.

From the outset Wade's strong melodic sense is evident, 'So Far Away’ s strident riffs and dynamics recalling Steven Wilson's solo work in its merging of coruscating guitar, organ and tricky time signatures. It is an impressive opener and one that will appeal to fans of both Dodson and a bluesier, harder rocking sound. He then throws us sideways with an absolutely beautiful slice of folk melancholy with 'Something More', mandolin and finger picked guitar evoking the troubled spirit of John Martyn. 'Farewell My Love' continues at the folkier end of the spectrum, albeit before twisting into a more Kinksian or classic English psychedelic rock with a hint of Elvis Costello. Effortlessly melodic and memorable this is finely crafted material, Wade has obviously honed and crafted these songs, carefully accentuating the hooks and highlighting the harmonic resonance that fills this record. 'Home Is Where You Are' is nothing if not a classic pop song, Wades' emotive vocals carrying the song forward on a simple percussive acoustic beat. Make no mistake though; this is not standard rock fare. A backwards guitar solo entirely unexpectedly enters the song before it returns to its central melody. Indeed these dark shadows and quirks appear throughout the album, meaning the music herein strikes a note on one hand of being a psych masterpiece in the vein of Ray Davies work, whilst on the other hand these unexpected features accentuate Wade's singular, unique muse. Indeed, there are obtuse corners and curious and liberally sprinkled surprise moments throughout. 'Cold Winter' for example, is a plaintive and affecting piece of acoustic balladry but it is also welded, winningly, to an almost gothic (in the sense of The Cult and The Mission) bassline and flanged guitar. 'Falling For You' is a heartfelt full on psych monster whilst 'I Don't Know' is a piano led Warren Zevon-esque philosophical paean to humankind, with some truly incredible bursts of dark psyche guitar. 'Take My Hand' is a garage stomp of fuzz and lo-fi punk attitude and is truly exhilarating whilst 'Helpless Love', with its descending bassline is a 'Sunday Afternoon' for modern times, downbeat yet eminently catchy in its acidic jangle.

There is also a considerable emotional range on this album, Wade has created something here that is both mature and yet life affirming; there is heartache here but this pain is also life affirming. Fans of Bob Mould's later work in Husker Du and The American Music Club will find much to love here, indeed 'Something Beautiful' could be an outtake from 'Candy Apple Grey'. And there is darkness; 'Take Me Away' is a gentle twilit acoustic slow burner, while 'Walking on the Wrong Side of Every Street' is a tortured organ and piano led lament. 'Outta My Head' is an effective howl into the storm, a plea for peace of mind whilst follower 'Watching You From Afar' is a veritable mountain of a song, explosive drums and guitar feedback enveloping Wade’s voice, his vocals carrying the melody through the maelstrom. 'Lead You On' is a delicate psych pop nugget before closer 'Last Call' s choppy guitar and harmonised vocals build and layer towards a breathtaking climatic finish.

And here's the remarkable coda to this album’s story; Wade plays every instrument, produces, arranges and every song is his. It is entirely one man's vision, tracks written over a period of years to then combine together to form this, his magnum opus. This is also a very genuine record; honesty bleeds from every vocal line, every wrung out guitar note and this sense of truth only endears the music to the listener more. Between the Wade brothers English psych is in safe hands. Give your senses a push - give them a treat - with this fine album.

Listen to "Pushing Senses" on Spotify.