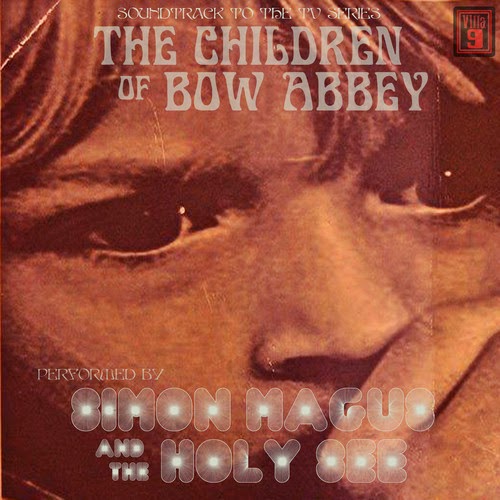 ‘The Children of Bow Abbey’, a little remembered or seen 1970’s children's TV programme, has since fallen into notoriety due to its absolutely terrifying nature and potted history. The show was deemed far too unsettling for children and moved to a late night TV slot after only one episode was screened.  For those that recall seeing this one traumatic late afternoon TV experience or for those who stayed up or snuck downstairs to follow the disturbing action unfold, Simon Magus and The Holy See's soundtrack will undoubtedly play a major part of their memories. And what music it is, a veritable suite of ghostly electronics and creeped out composition. Once again we have the artistic hub of Villa 9 to thank for uncovering this musical relic from true obscurity. And thankful we should be as, short of the theme for 'Children of The Stones' or perhaps 'Chocky', there is little in the way of classic 70s paganesque kid’s TV that has a soundtrack as eerily unsettling as this one. A generation of night terrors were truly born with the watching of at least one episode of this misjudged but ground-breaking curio and hearing its accompanying musical backing.

The soundtrack begins with Villa 9 production logo tone, a sure sign that what we are about to hear is of the highest quality. 'The Children Of Bow Abbey' follows with a spooked out mirage of birdsong, a disembodied and reverbed child's voice intoning 'Ring A Ring A Roses' and the most creeped out yet stately harpsichord you will ever hear. Echoes of John Carpenter’s score for 'The Fog' abound and we are left questioning; what was music of this quality and resonance doing in a children's TV programme? Haunted harmonies criss-cross and interweave, expertly evoking a nightmarish nostalgia. The track ends with the laughter and playing of children and one long ominous analogue hum, a terrifying conclusion. 'The Dark and Lonely Place', with its solitary and ghostly clarinet and descending vintage synths, should really have been the backing for the creepiest of adult dramas or European arthouse thrillers. What was in the water in the 70s and early 80s that provoked such superb but unsettling children's TV shows? 'The Owl Service', 'Children of the Stones', Noah's Ark', 'Sky’, ‘The Changes' and 'Bow Abbey' itself...all either deeply heathen or apocalyptic.

'Departures' is an overture of loss and disturbance, an electric sonata dedicated to something...unhuman. 'Footprints in the Cellar' in turn is a church organ led perfectly pitched package of dread. These pieces would not be out of place at all in a Giallo or Argento film, nor any by the afore mentioned John Carpenter, for these are serious, crafted compositions. It does seem as though gifted composers channelled their talents where they able to back in these dark twentieth century days; and if it was children's TV, so be it. Witness for example Ken Freeman’s 'The Tripods' theme, a veritable electronic symphony, or Paddy Kingsland’s opening title music for ‘The Changes'; both eminent pieces of electronica. 'Bow Abbey' is very much of this standard and in this linage. It's is a hugely haunting affair, the motifs and atmospheres are left with you long after the music has ceased, taking up a hellish hiding place in your head and refusing to be cast out. 'The Child Outside The Window' (that very title evoking terrifying memories of the infamous scene in the TV adaptation of ‘Salem’s Lot’) is a mix of backwards kid's voices that segues into 'Museum Of Mannequins', a montage of vintage keyboard squelches and glistening glockenspiel (which, curiously, seems to have been the 'go to' sound of the 'unexplained' during the 70s). This descends into echoing giggles and laughter and the sound of numerous music boxes playing at once, a sound that will undoubtedly haunt your dreams for days and nights after hearing. 'Behind The Attic Door' s whispered voices and reverberated piano notes hint at what is lurking there (don't go in!) whilst 'A Delicate Melody' is just that, a perfect piece of analogue that Tangerine Dream themselves would be proud of. Beautiful in its night time shimmer and subtly plucked notes this track (and indeed the soundtrack as a whole) stands on its own as a hugely successful and crucial work of vintage electronica.

'The Playroom' s backwards tapes and unnerving banging suggest somewhere you would never want to enter far less play, it is truly masterful in creating an air of absolute fear. 'The Midnight Music Box' replays the central motif with some gorgeous vintage synth sounds; any fan of hauntological acts such as Belbury Poly, Concretism or The Advisory Service will find much to love here. 'The Shadow of the Mistress' is a deeply evocative fugue, electronic strings (again evoking the closing theme of John Carpenter's soundtrack for ‘The Fog’) washing over a shimmering Satie-esque series of piano and glockenspiel notes. 'Trapped in the Attic' evokes just that feeling; a hollow wind and the album’s creeped out central motif again resonating as if in the darkest and deepest of caverns. Harpsichord enters before the track starts to twist, squirm and play in reverse, heightening its disturbing nature even more. 'Is Anyone Upstairs?' gives us a brooding electric requiem mass before 'Departures' reprises with its beautiful melancholy piercing the gloom. 'The Horrors in the Cellar', a cacophony of time stretched screams and wails, is not something to play in the dark, ever. It is hugely, terrifyingly effective. And then, it is over. The ‘End titles’ play, returning us to the ominous, descending notes of the Bow Abbey theme. What have we just heard or witnessed? That question must have been in the thoughts of thousands of petrified school children throughout the UK one sepia afternoon in the 70s. Listening now, many will remember the fear of watching but not all the detail, some may even recall this music and may find themselves transported back to terror upon hearing this soundtrack. Some will remember every detail and that is why, 40 years on, they still struggle to sleep soundly at night.

Whilst quite obviously deeply inappropriate as a lost children's TV soundtrack (it's far too good for a start) this is a stunning work of classic electronica, up there with the BBC Radiophonic Workshop and White Noise's 'An Electric Storm'. These December nights are darkening now, the still, cold winter is just the time for reminiscence and in the silent night we might still hear the ghoulish laughter and sound of The Children of Bow Abbey. Leave the lights on, close the curtains and tell yourself this was all long ago......or was it?