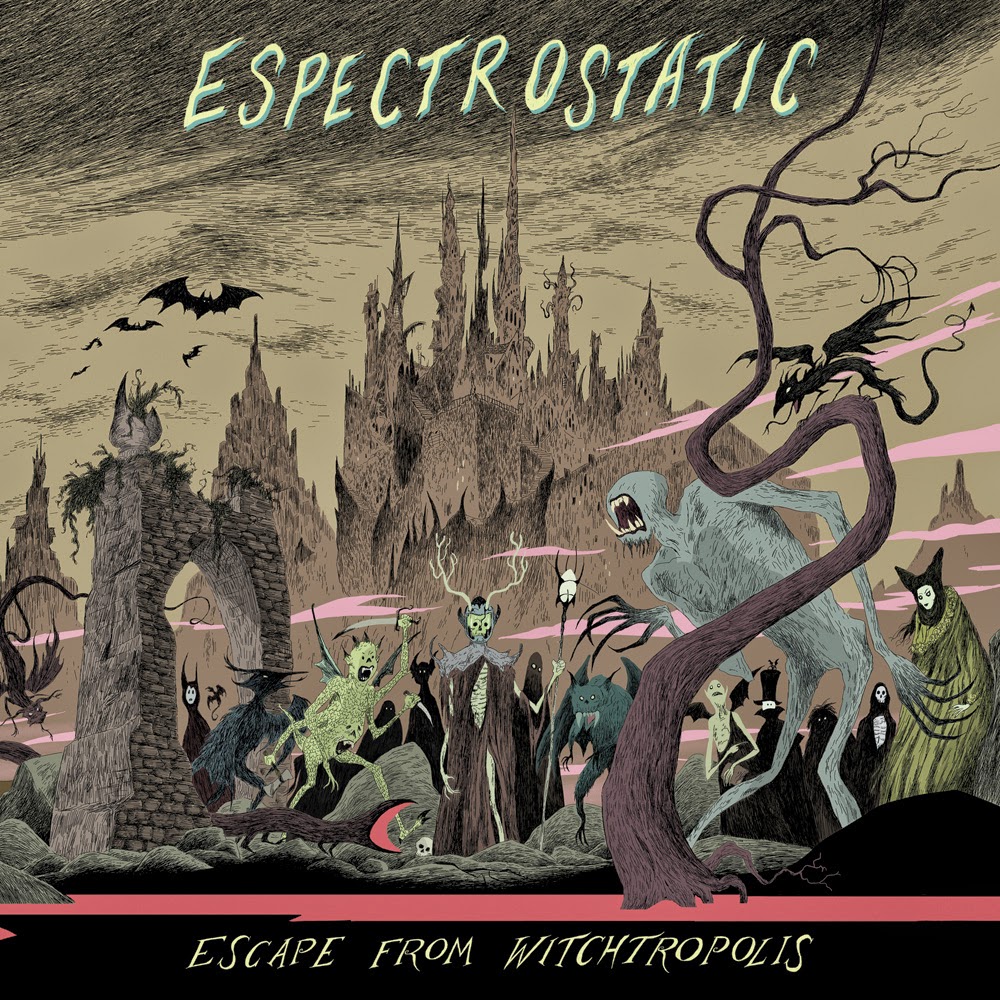 Synthwave artist Espectrostatic (aka Texan Alex Cuervo) describes his intent with new long player, the superbly named 'Escape From Witchtropolis', as 'wanting to do a spooky TV show theme, but with a propulsive motorik beat'. A fine ambition indeed. Also a member of Hex Dispensers, Cuervo has several superbly wrought electronica releases in his back catalogue which are clearly a labour of love; highly detailed and carefully crafted, they are both homage to the vintage electronic soundtracks of horror maestro John Carpenter and unique, Blade Runner-esque glimpses into a frightening and fearful future.

Opener 'Removing The Bandages' is a haunted electronic intro to the album, the ghosts of the past flitting past the protagonist’s eyes with a haze of reverberated electricity. It leads directly into the propulsive, and yes motorik beat of the title track, banks of keyboards and shimmering electronic percussion creating a driven and tension filled main theme. Reminiscent of Chrome at their sci-fi, dystopian finest, the dread filled synths and new wave bassline provides a truly thrilling ride through the smog blackened city. 'The Feral Kids', with its ‘Foetus’ style big band rhythms and bass note piano motif, is a sinister, Ballardian traverse through some especially shadowy streets, the synthesised sound of engines howling across the landscape. 'This Is A War Universe' is a piano led, John Carpenter-esque epic (think 'Escape From New York' as the most immediate influence); electronic drum breakdowns echoing behind the stately melody and whistling harmonies. Cuervo is no amateur; these songs are carefully crafted vistas of sound with expertly handled atmospherics. Vintage whirls, hums and keyboard patches hover as the track builds to a crescendo.

'The Obelisk' is more muted, more spectral; analogue synths and harpsichord merging with some monolithic keyboard stabs and riffs before returning to the electric wasteland once more. It's a towering moment, hugely evocative and perhaps hauntological in a different sense from that which we are aware of in the UK. British hauntology often reflects a unique form of media nostalgia such as 1970s BBC children's TV shows or the sense of dystopia that can be found in archived public service broadcasting safety adverts such as 'Deep Water'. Perhaps the US have their own specific hauntological or psychogeographical past to draw upon; John Carpenter, the aforementioned 'Escape From New York', the new wave of the late 70s, The Velvet Underground, Carnival of Souls and similar B-movies, perhaps the trash and glitter of cable TV. Maybe these artefacts are the blood in the veins of this music.

'She Hunts Them In The Afterlife' robotic coldness and pumping bassline suggests the America of Carpenter’s 'They Live', a blighted landscape of paranoia and broken dreams. 'Sinking Into The Microverse' is a dread filled creep through dangerous and darkened alleys, Brad Fiedel's infamous and hugely influential soundtrack for the original Terminator movie expertly evoked here. 'The Cold Spot's spooked xylophones and epic waves of keyboards are a moment of breath in the tension, a reprieve from the urgency as is 'Abandoned Places' which shimmers into view, a widescreen dawn that suggests a post-apocalyptic cityscape. Filled with melancholy and regret, this is hugely evocative moment and screams out for something celluloid to accompany. 'Transmogrifier's sinister hum and electronic howl winds through the estates and buildings of Witchtropolis, filling the avenues and alleyways with analogue dread. A synthesised choir join the coda, a stately procession for the dead. 'The Goddamn Apocalypse' ends the album, decayed piano and backwards reverb building to a heart wrenching finale amongst the solar wind.

A hugely inventive and descriptive recording, a soundtrack for an imaginary film and just a very fine piece of vintage electronica, 'Escape From Witchtropolis' is a successful listen however you approach it. You may wish to escape from but you will most probably want to re-enter at some point shortly after to experience the adrenaline and rush of this unique album once again.