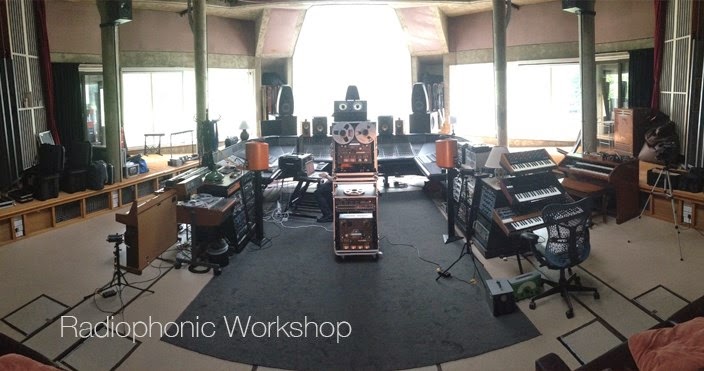 Available here through Society of Sound.

"In 2013 the Radiophonic Workshop reconvened to play live and to rekindle that spirit of innovation in sound. Building on their legacy and with the benefit of another 16 years of what may loosely be referred to as “progress” since the Workshop closed in 1998 (there are, after all, times when only a tape loop, tobacco tin or malfunctioning sweep generator will do) they have once again taken up residence on the outer boundary of sound design.

The time spent at Real World Studios, where most of this work was conceived and recorded, was both invigorating and liberating for the group’s members. Like their old home at the BBC’s Maida Vale (minus the many layers of cheap green industrial emulsion) Real World studios proved to be a creative playground for these lovers of sound. The space in which the work is created has always been important and has a profound impact on the kind of work composers are able to produce. The group took over the studio, filling the iconic Big Room with synthesisers (ancient and modern), gadgets, lampshades, knobs, dials, found objects and children’s toys. It became a Workshop-away-from-home. A stairwell provided both an additional instrument and a wonderful acoustic space in which a Big Idea evolved. In a tiny back room, reminiscent of a BBC broom cupboard, Dr Dick Mills set up Studer and TASCAM tape machines to create loops and labyrinths of feedback into which were fed analogue bleeps and concrête clanks from 8 bit samplers and the objects and sounds found about the building.

Audio was moulded and sculpted. Compositions evolved, dissolved and recrystalised over time, with thestudio itself employed as a compositional tool - every part of that experience is integrated into the work. At one point the engineers were persuaded (they didn’t need much persuading, to be honest!) to run cables out to the weir in the studio grounds, recording its gurgles and glugs on a Soundfieldmicrophone. Binaural microphones were set into a pair of spectacles worn by Peter Howell who then sound-mapped his physical journey through the workspace. And, yes, Delia Derbyshire’s infamous greenRadiophonic lampshade (used to make many of the tones and sounds the Workshop became famous for in the early 1960s) makes a guest appearance too.

Out of this joyous experimentation emerged the motifs and ideas that became this album. It marks a very creative and special time in the Radiophonic Workshop’s continuing story and may even hint at some of what is to follow. Welcome to our Radiophonic world."