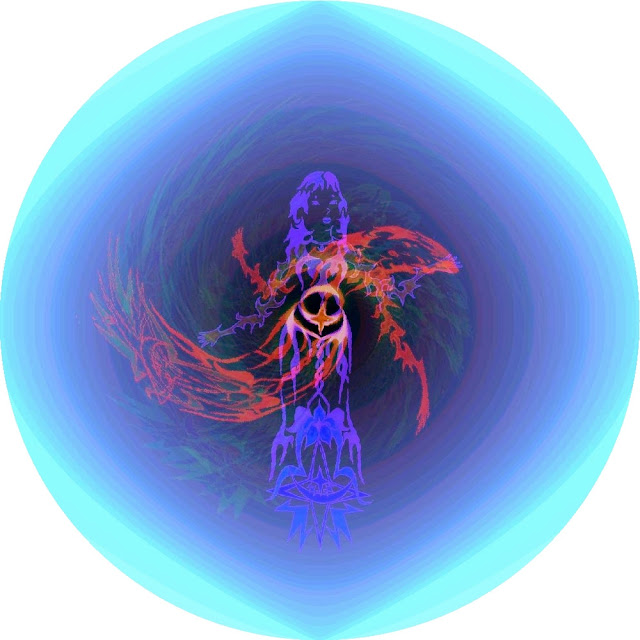 Katje Janisch has had a few tantalising and bewitching psych tinged songs on ye olde world wide web for some time now. It is therefore a genuine delight to find a whole, brand new début album of otherworldly and wyrd folk to fall under the spell of. Entirely performed and recorded by Janisch herself on guitar, recorder, percussion, piano, dulcimer and other esoteric stringed instruments, this is music that harks back to the classic purveyors of psychedelic folk such as Linda Perhacs, Susan Christie and Vashti Bunyan as well as setting out its own, unique stall.

Opener 'The Ancestors' begins with a gentle sprinkling of piano, woodwind, the sound of a dulcimer and Janisch's distinctive and ethereal harmonies. Transportive and utterly beautiful in its cascading melodies and unearthliness, this music is magical indeed. 'The Dance' is a sprightly recorder led, Will O' the Wisp of a song; it seems to skip through the woodland in a haze of acidic folk via a myriad of layered vocals and glistening acoustic reverie. Next, 'Neptune's Dream' is a more reflective piece, Janisch's carefully and effectively placed vocal harmonies drifting softly over finger picked guitar and washes of strings. This is music to dream to, to close your eyes to and find yourself in the land of Fae or perhaps down the rabbit hole with Alice herself. 'The Queen of Swords' melancholy air is punctuated by insistent percussion, adding a delicious tension to the stately and baroque atmosphere. The song ends with a choir that literally raises the hair on the back of your neck. Fans of Joanna Newsom, Fern Knight and Espers will adore this as will aficionados of classic psych folk such as Mellow Candle, Caedmon, Trees and Stone Angel.

'Seven' adds cello and a medieval processional grace, these are songs of another era and another world; romantic, beautifully sad and truly timeless. Special mention must go to Janisch's incredible vocal range; she holds a quiet power that never overwhelms the delicate and considered arrangements but which instead compliments her music and becomes almost an additional instrument in itself. Next, 'The Yew Tree (Resurrection)' is a folk fable of eerie and nimble loveliness, xylophone twinkling over cello and an unforgettable, circling guitar motif whilst 'Mother' is haunting chamber folk with a late night Wicker Man mood. 'The Golden Cup' reminds this listener of Nick Drake's wistful and wondrous stylings; a dusky, autumnal, smoky air is ably conjured by Janisch's spectral vocals and the echoed woodwind. 'Cordelia's Lament' is a ghost filled, sombre but evocative affair, like the aural equivalent of cinematic chillers 'The Innocents' or 'The Haunting'. Strings bow and bend and pizzicato punctuates the song's icy, gothic atmosphere. Final track 'The Hunter And The Fairy' adds gentle acoustic warmth in a wyrd lament that is filled with both magic and moonlight.

That an album containing so many gentle jewels is only Janisch's début bodes extremely well for her future releases, for this a hugely accomplished, deeply impressive and utterly spellbinding album filled with white witchcraft and the lore of the woodlands. For genuinely timeless and beautifully made acid folk take a trip here, just west of twilight.

Available now in limited quantities on the Reverb Worship label in a lovely, handmade sleeve featuring Janisch's artwork. Make haste as this will sell out quickly.

Here's a streamable version for you to check out: