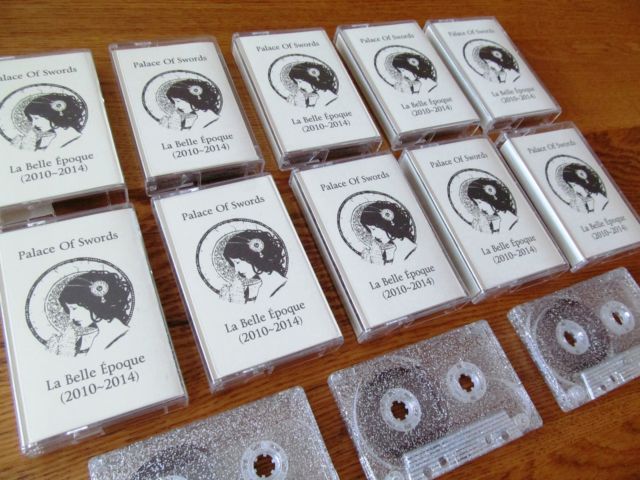 Palace Of Swords, the ongoing electronic project of Aberdeen based visionary Peter Lyon, released two very limited 3” CD EPs on the Reverb Worship label that were snapped up almost immediately and have been out of print, but not out of demand, ever since. Following their 'Remixed' CD and 7” (which featured artists such as Joe Foster and Midwich Youth Club remixing gems from their back catalogue), Lyon has compiled a selection of past glories and newer tracks into this compilation of sorts which comes in a beautifully put together cassette release. Quite unlike anything or anyone else, Palace Of Swords feed from their influences of 90's independent music and 60's psychedelia to create shimmering, highly layered and carefully constructed electronica. A very special release by a very special and unique artist, this release is already selling quickly so haste is advised.

The album begins with the perhaps autobiographical 'I Am Peter The Hermit (Part 2)', sampled dialogue floating across sparkling analogue synth and flanged electronic percussion. With shades of Neu, Cabaret Voltaire and Suicide as well as acts like Broadcast (but also thrillingly and utterly individual), this is 'hairs on the back of the neck' material. The track virtually glides, repeating its central motif but also appearing to shape shift and morph as it develops into an electric symphony. 'The White Goddess (Part 1)' begins with a howl of electronic feedback and rising and falling oscillated keyboard strings as a delicate vintage keyboard riff and drone gradually emerge. Hugely inventive and quite unpredictable this sense of creative force and musical exploration reminds this listener of the classic 'White Noise' album that was produced by certain BBC Radiophonic Workshop luminaries in the late 60's, yet Palace Of Swords are not a hauntological throwback emulating the sounds of yesterday. They are something entirely of their own and this is part of the joy of hearing their work, it is like discovering a new musical language that conveys a thirst for exploration and an entirely new electronic palette of sound. Next, 'Echoes From A Distant Star' places pensive, cascading and reverbed organ notes across a virtual night sky, the haunted melody looping to provide both the end of one line and the start of the next in an eternal voyage through the darkness. Both melancholy and deeply beautiful it takes the breath away; Palace Of Swords make you stop, listen and wonder. 'The Castle Spectre's echoing and twinkling keyboard line floats along on a psychedelic haze, percussion propelling the track along with an insistence that is pleasingly addictive whilst 'The Black Lodge Will Rise Again' is a darker, more ritualistic affair altogether. Framed with the squall of Psychocandy-esque feedback and pounding drums this is the dark heart of the 60's dream, echoes of Altamont and Charles Manson seeping into the hearts of the flower children. 'Deer Park' meanwhile is a motorik anthem with snatches of film dialogue, reminiscent of The Fall this is hugely transportive music; I challenge you to not be mesmerized by these songs. Speaking of The Fall, the Mark E Smith influenced title of 'Live At The Aberdeen Witch Trials' gives way to a resonating electronic pulse and a solitary, echoed drumbeat that is both hypnotic and adds a powerfully effective tension. This is followed by 'The Temple Of Golden Rays (An Opium Reverie)', an Eastern, chiming melody layered with a spectral and wraith like harmony that shivers throughout the track creating a deeply immersive and trance like atmosphere. 'Asethete Cured's syncopated drum beat and echoed guitar merges the Velvets, Spacemen 3 and House Of Love with Delia Derbyshire and Ruth White to emerge sounding like nothing you will ever have heard before and all the better for it; Palace Of Swords vision is excitingly, utterly their own. Closer '(We Are) The New Hyperboreans' is a delicate, reflective piece of electronica that manages somehow to be both heart breaking and uplifting, something Palace Of Swords manage with ease.

I cannot recommend this release highly enough. These gems were thought lost when the original EPs went out of print and it is testament to the ever splendid Reverb Worship label and Lyon himself that we are again able to immerse ourselves in this, Palace Of Sword's own "La Belle Époque". Do not delay, this is essential listening; let Palace Of Swords be the card you pick.

Available now on cassette with an inlay printed onto metallic gold paper and cassette shells complete with silver glitter.