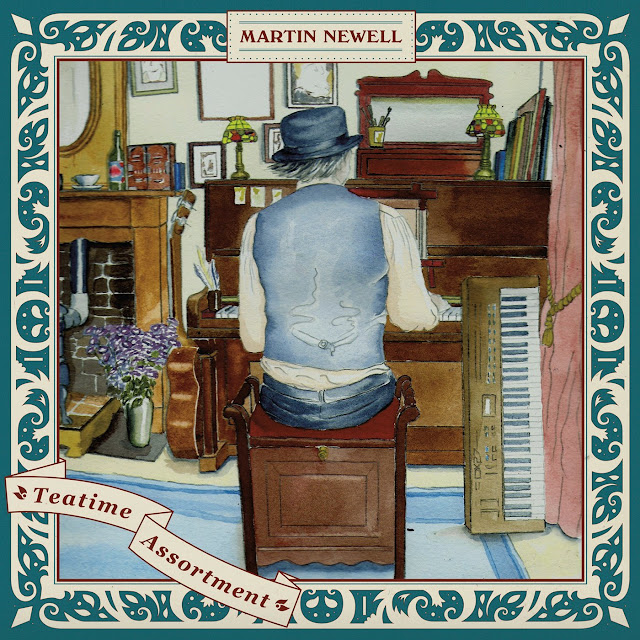 Entering the fifth decade of his musical career, the undeservedly obscure English poet and songwriter, Martin Newell is showing no signs of slowing down.

In the last 5 years alone, the home taping pioneer has released albums and EPs under both his own name, and under his nom du band, The Cleaners From Venus. It’s an output matched perhaps only by Robert Pollard for sheer quantity. But I think that the consistency of the Englishman has remained at a higher level than that of his Ohio counterpart.

And that brings us to this 24-track collection, a sort of 'best of the last 5 years'.

The bulk of "Teatime Assortment" contains material released on the most-recent Cleaners From Venus albums: "English Electric" (2010), "In Chimp World" (2011), and "The Late District" (2012). With 4 previously unreleased songs included just to irk the fans who already bought the albums. But more on that later.

Newell sings in what can only be referred to as an English drawl, lingering over words and phrases as if he is reluctant to let go of each one. It’s an affecting delivery that makes Martin come off as something akin to Robyn Hitchcock’s country cousin.

“Wake Up and Dream,” from "English Electric", opens the collection with guitars that chime and sparkle like morning bells announcing the beginning of a new day. Martin calls out the title phrase, sounding like an old(e) town crier. It’s a fitting album opener and, as a song, just charming as hell, as pretty much every Newell song is.

The new tracks are every bit as good as the rest of the material and could have easily been slipped onto any of the albums from which the bulk of this collection was culled. “Shabby Heart” casts Martin as an aging idealist, watching with bemusement, as self-important Rock Stars sing about changing the world. “You may bang on your drum, that the revolution has to come, But you’d all go running back to mum, should it ever start.”

Taken out of context, the lyric reads like he’s calling out big, idealistic 'Change The World' rock stars (U2?) on their bullshit. But Martin delivers it as if you were sitting next to him, in his living room, as he tells you (and only you) about how he sees the world. It’s one of Martin’s particular gifts. He’s just a storyteller, telling his stories.

There is not a dud to be found in the collection and, for folks who are curious about Martin and his new material and don’t want to go all-in just yet, "Teatime Assortment" is an excellent purchase.

For fans who already own the albums, it’s a frustrating release—having to buy 20 songs we already own to get 4 new ones. Hopefully he will eventually decide to do the sensible thing and put those new tunes on their own EP.

Here's a downloadable sample of what to expect: