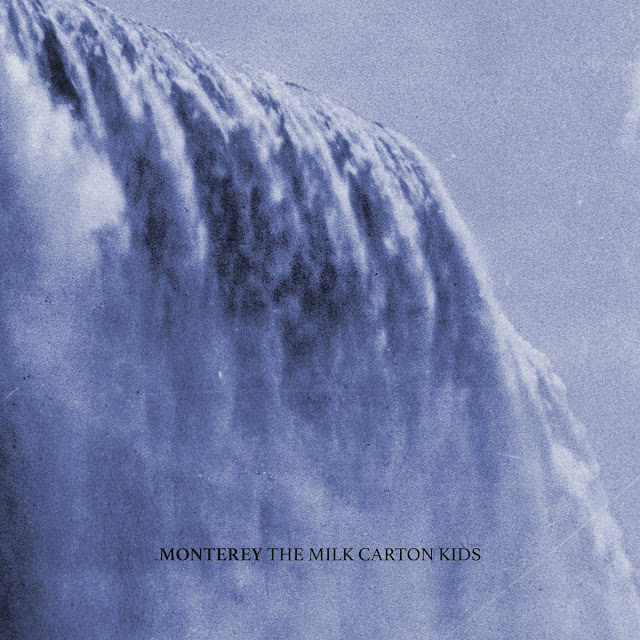 A number of people have walked off to look for America. Some have even taken a horse drawn stage from Monterey. The Milk Carton Kids might be here to remind us that America* is harder than ever to find, but beneath our feet (and our wheels) no less.

The new album, "Monterey", is a road movie. Indeed, the first line of the title song is "I can hear the road call." From there the songs move through Los Angeles, Tuscaloosa, Asheville…other places, places without names or names forgotten.

I'm writing not far from the Grand Coulee Dam, a good reason to have the album cover, a Tonalist photograph of Niagara Falls, on the seat of the truck beside me. And see? --- all it takes is one line to go from one end of the country to the other, especially if you're driving and listening to these songs. As singers of, and contributors to the Great American Song, the Kids seem to stride more than walk, taking long, significant, seven-league steps, even though, with their voices blending into one, they're just "a little man from a little town."

The album was even recorded on the road --- in various churches, museums and concert halls in North America, and like Niagara Falls, these places are found on both sides of the northern border between the United States and Canada.

Anyway, they've always been cinematic --- "keep your hands where I can see them" from the song "Michigan" on a previous album --- is spoken to an ex lover, but borrowed from the Manifest Destiny lexicon of John Ford (not only do I own this prairie, but I own your hands). And the line is given a new twist when quoted by someone playing a guitar, but the movie connection is the overwhelming association with such a ubiquitous line.

Further into the title song they sing "I can see the north star from this bed," suggesting quiet repose or perhaps a feeling of regret beckoning directional hope, a wish sent up to Polaris, the one seemingly stationary thing in the sky. And then past that window, another portal, the milky way, offering rescue to "the night betrayed" as rain clouds are summoned. The clouds provide a ceiling of containment reflecting sound back to earth. This and their foreboding ensure someone will hear how loudly the songs are heard. That ceiling recurs in another song, "staring at the ceiling above like it contained the secrets of the stars" and throughout the album, the silence, mystery and remoteness of the sky repeatedly hangs over the uncertainty of life's realities on the ground. The notion of rescue and sanctuary or the lack of them comes up repeatedly also, such as in songs like "Getaway" and "Sing Sparrow Sing", but these are not really themes or motifs ---the songs are too intuitive for that sort of interpretation.

This encapsulates what they do --- besides the sublime harmonies and nuanced guitars --- they keep things rooted in the ground of human emotions, the furniture of everyday life, even a bed, even the loss of hope, but always feelings pinned at the point of a larger vector opening out to whatever is out there. In "The City of Our Lady", which sounds like it was written on a train, "history is hanging as a picture in a frame" and a crying infant, its mortal tongue awake, becomes the voice of passing humanity. The long and large panorama of life hinging on a little song.

That once-upon-a-time national anthem, "My Country 'Tis of Thee", has been updated a number of times, including an 1840s abolitionist satire. In this context "Freedom" is offered up, a war weary song in which "ev'ry mountainside" is replaced by screams and gun shots and freedom has become daylight stolen from the sun --- such a fine metaphor, and one of many that these guys sing freely.

The album closes with "Poison Tree", in which a yearning for the dissipation of anger hopes a "little drop" of poison won't grow full blown into William Blake's bright, deadly, apple of revenge. But this song is humble and like the rest of the album, though strung with melancholia and somber tones, is ultimately not a downer. How could it be? They take such pleasure in playing and singing and they do it so well. We are lucky to have them.

* I happened to be finishing this up as the SCOTUS decision on gay marriage was reached, so hope rises.