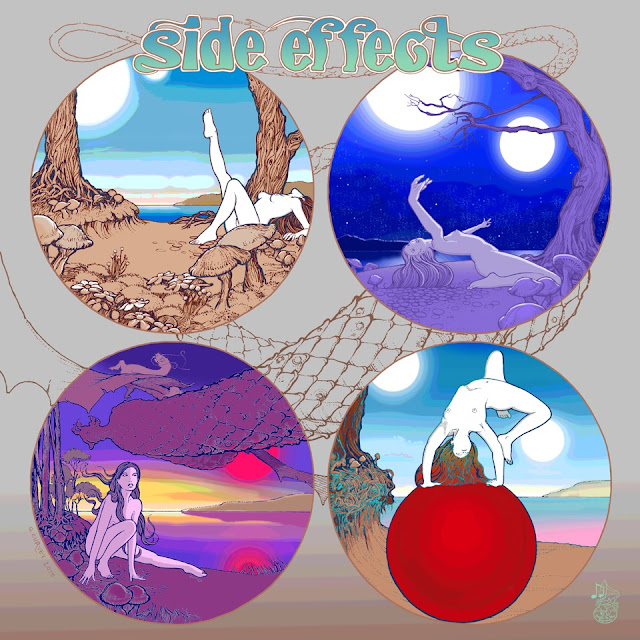 The always ambitious Fruits de Mer label have tweaked their formula slightly for their latest release with fantastic results. Classic tunes from a bygone era, given a good psychedelic going over is still the order of the day, but "Side Effects" is a tribute to the 12" single, with eight different artists given a full side each to dissect and explore a favourite track. Some have chosen tracks which are already lengthy in their original forms, while others have been more adventurous in their selections.

This handsome box set (with artwork by The Luck of Eden Hall's Gregory Curvey), contains four LPs, "Sidetracks", "Sideways", "Sideshows" and "Sidesteps". Let's take a look at them one by one.

The Soft Bombs open "Sidetracks" with a faithful rendition of Pink Floyd's "Echoes", which sticks reasonably closely to the original, but accentuates all that was great about the Floyd version. On the flip Arcade Messiah flesh out Aphrodite's Child's "Four Horsemen" encompassing everything from psychedelia to space-rock to prog-metal (which makes it a bit of an anomaly in the FDM catalogue). 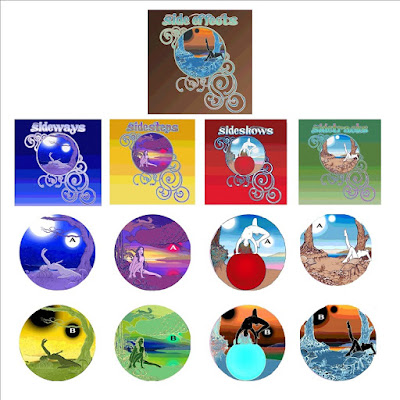 "Sideways" welcomes the Bevis Frond, who tackle a krauty gem in Electric Sandwich's "China". Originally released in a highly truncated form on FDM's "Head Music" collection, this version is almost triple the length, with Nick Saloman shredding relentlessly over a pleasing motorik pulse. J Mascis eat your heart out. U.S band Wreaths are next, with one of the more clever reinventions here. Their take on Gordon Lightfoot's "Sundown" is cosmic american music of the highest order. Spacey waves of psychedelic ambience that never get too busy, gently cushion a strong vocal performance. If My Morning Jacket had started listening to Agitation Free instead of Prince, they might sound like this now!

"Sideshows" turns the space-rock dial all the way up to eleven. Superfjord turn in what I reckon is the highlight of the set, turning the Byrds "CTA 102" into the stratospheric envelope pusher that it's always yearned to be. The explorative instrumental passages here are pretty great, and there's an amazing vocal sequence that sounds like someone introduced Brian Wilson to a sampler. Pretty special. The Luck of Eden Hall are on the other side, de-programming some of the more progressive elements out of Yes's "Starship Trooper" and reprogramming it as a prime piece of cosmic psychedelia.

Lastly we have "Sidesteps", a pretty amazing prog jazz / space-rock hybrid. Julie's Haircut do an ambitious, but fabulous job of Miles Davis' "Shhh/Peaceful", fusing the original's sense of zen-like wonder, with some of the more furious playing from "A Tribute to Jack Johnson". Most would fall flat on their face attempting this, but Julie's Haircut own it. And what to say about the final track here? The wilfully perverse Sendelica take a crack at Donna Summer's "I Feel Love". Stripping it of all vocals, they reshape it into an extraordinary suite of ambient / space-rock with a few progressive jazz elements. Amazing.

What's particularly impressive about "Side Effects" (apart from the inventive arrangements, and stellar playing), is that over the course of these four long records, the artists never lose their focus, contributing 17 to 24 minutes apiece that are entirely filler free. I'm almost certain that this is my favourite Fruits de Mer release so far, and as FDM are one of my very favourite labels, you can take that as a particularly enthusiastic recommendation.

Available here from August 21st - preorder now, I'm told that they are selling extremely fast, and may be all sold on pre-sale.