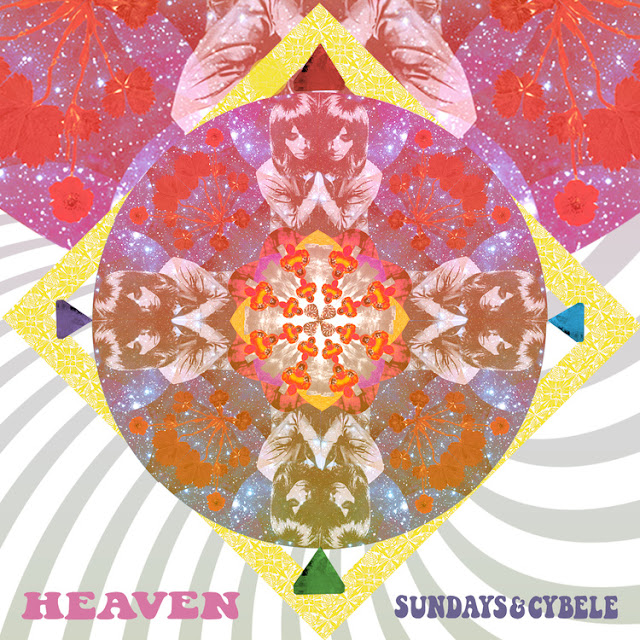 The always forward thinking Beyond Beyond is Beyond Records delivers another impressive record; this time, it’s Sundays & Cybele’s “Heaven,” which caters in maximal dream pop and lush psych. If you’re familiar with Sundays & Cybele’s earlier work, this one’s a bit different and a bit more polished – even compared with the lauded “Gypsy House.” Hokkaido, Japan’s Sundays & Cybele have traded in the sometimes dub infused tracks (there’s an excellent dub remix of “Gypsy House” out there) and acoustic guitars for motorik dream pop landscapes and wild electric noise. The result is, in many ways, a continuation of what they started with 2012’s “Gypsy House” (which was re-mastered and released this year by Guruguru Brain) but, here, the songs reach even further, channeling some interesting punk aesthetics and new found, far out there guitar leads.

“Black Rainbow” introduces listeners to a build of sound that, for most bands, signals the end of a set but, in this case, initiates new comers to the quality of their sound: it’s all done with a dream pop flourish but played with ambition usually not attributed to the genre. As “Black Rainbow” continues, the band continues the trend of maximalism in their guitar leads while the rhythm section falls into a motorik jam that recalls Neu!

“Empty Seas” unfolds a catchy and immediately classic sound from its initial squelch of dripping guitars and continues to build toward a driving chorus. As it is throughout the entire album, the mix is great, balancing the steady, clear bass notes and percussion with sonic slabs of guitar and slightly delayed vocals (Japanese language, for those wondering). Unlike “Black Rainbow,” “Empty Seas” relies upon a punk ideal rather than lush progressions.

This is a diverse record that consistently challenged expectations, swaying from Krautrock to punk to – for lack of a better way of putting it – a psych ballad. While eclectic, it’s consistently interesting and measured in its arrangements, whether relying on a natural wall of feedback or glimmering wah. “Heaven” is ready for digital or limited cassette pre-order below on Beyond Beyond is Beyond Records’ Bandcamp page below.