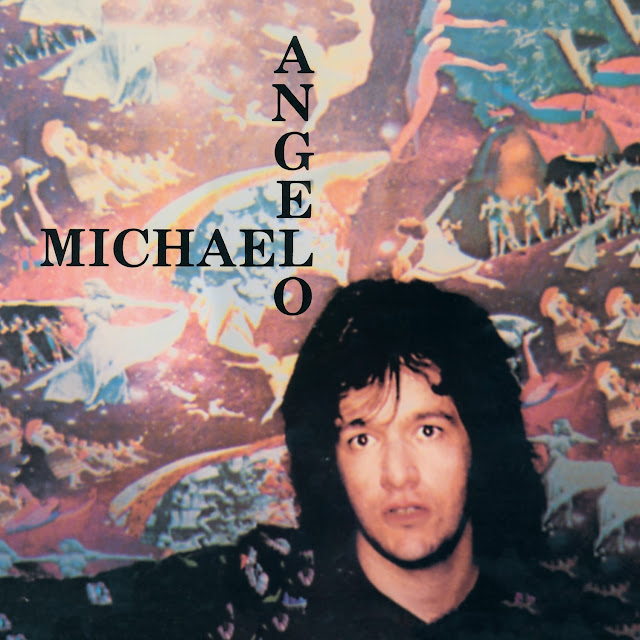 If you've ever dabbled in out-of-its-time outsider psychedelia, there's a good chance you've heard and enjoyed this album already. And if you've never heard Michael Angelo Nigro's self titled 1977 classic private press album, now is the perfect time to make your introductions.

This is an album that has been analyzed and reviewed so much, that it's becoming a little trendy to state that it's over rated. But you can't believe everything you read online, and it's best to let your ears make their own judgements in the end. And I certainly don't hear anything over rated about this. Michael Angelo was a much more accomplished songwriter and player than most, especially for a studio musician. The album was recorded during off hours at Liberty in Kansas City, and while simple and bare, it has a charm that shines through, instead of the rushed feeling it should have, considering the circumstances of its creation.

It's full of hooks, ringing Byrdsian-West Coast Fender guitars, eerie synths, and Chris Bell/Big Star guitar solos. We start off kicking with "Flights of Pegasus" which twists and turns through major and minor modes in a psychedelic flux that I just eat up. "Oceans of Fantasy" features a tom-roll drum/pinch harmonics guitar intro that sounds JUST like something from the coming decades by so many indie/pop rock groups. The reverbed lead guitar in between the verses, the repeating hook....yeah, I was shocked when I heard it. It sounded so familiar, and not even really that retro. Influential much?

And let me mention as well, the introspective, but positive lyrics and encourage the search for one's self; yet they have a slightly sardonic quality, as on "Checkout" and "Bon Jour Mr. VIP". They look respectively, at the topics of suicide, and the music industry, but it don't come off as morbid or cheeky. And the melody on “Checkout” is eat your heart out good. Like McCartney, or better yet, Emitt Rhodes. It's all wrapped up by "Future" which sounds just like early REM or the dB's would in the near future, thanks to its intro licks, but when the song fully kicks it is all Michael Angelo, featuring some 60s psych overtones. Think a West Coast amalgam with strange eastern-sounding scales and overdriven Fender to round out the middle break. Top notch stuff right here.

Michael Angelo Nigro sounded like nobody else, and for the time he strikes me as being on a whole timeless kick. He was undoubtedly a step ahead of the growth that began to take effect in the East Coast indie scene in the early 1980s. He sounds like nobody else, yet wears the influences of certain familiars on his sleeve. There's a reason that scummy record snakes bootlegged this down to exact copies, it really is an enticing listen (and investment-worthy).

There is really no better time for Anthology Recordings to put this re-issue out, it's available from their website on LP with a bonus "7 or CD/MP3. It’s from an original vinyl copy, and sounds excellent compared to the average needledrop's that have previously been released, with no noise-reduction. This is more like it, it sounds great. I don't need to tell you how good it is, as the press it's gotten lately has been quite amazing. You get a real feel for what was going on behind locked doors in the studio late in the morning, early at night, whenever there was a free slot.

One of the original indie-fi classics finally has its chance to emerge out of the shadows. It's only a matter of time until its popularity soars.