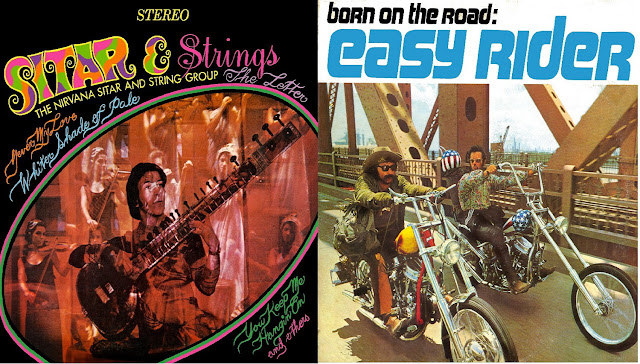 Long running, influential psychedelic archivists Gear Fab Records have plenty of competition in the world of psychedelic reissues these days, but continue to unearth interesting obscurities, while other labels languish a step behind. Gear Fab have recently turned their attention to sixties / seventies exploitation albums (with earlier releases reviewed here). Often (but not always) recorded in a single day by hastily named groups of session musicians paid a standard day’s wage, these albums consisted of covers and quickly conceived originals done in whatever style was currently in vogue. As you’d expect from this approach, they’re a pretty hit and miss affair as a rule, with a few albums which are acknowledged gems littered amongst the trash. Gear Fab have managed to dig a little deeper however and discovered a second layer of treasure, beyond the previously acknowledged highlights of the genre.

Little is known of the Nirvana Sitar and String Group, but the presence of several photos of the group on their sole album’s packaging seems to indicate that this was an actual group, rather than a thrown together ensemble of studio sessioners. “Sitar & Strings” is exactly what you’d expect from its title; a selection of popular tunes with the melody lines adapted for sitar, with string accompaniment ala the Living Strings. While this may sound like a roadmap to Squaresville, this is much more than the sum of its parts. A few excruciating moments on the strings of “A Whiter Shade of Pale” aside, the arrangements here are surprisingly adventurous, aided immensely by a storming rhythm section, while the sitar playing is simplistic, but thrilling in the manner of George Harrison and Brian Jones’ early dabbling with the instrument, both likely being major influences on this 1968 session. Of the familiar material, “House of the Rising Sun”, “You Keep Me Hangin’ On” and “The Letter” are the major successes, but it’s on the originals, credited to Ira Newborn, that things get particularly heady, dropping the strings in favour of vigorous solo sitar workouts. A surprisingly consistent and enjoyable affair.

Coupled with “Sitar & Strings” is 1970’s “Born on the Road: Easy Rider”. No points for guessing what particular bandwagon was being jumped on here, but in many ways this collection of late sixties biker rock material from various German bands is a better fit for the image of the “Easy Rider” film than its official soundtrack. While there’s no mistaking that “Born on the Road: Easy Rider” lacks the diversity and depth of the original soundtrack, this selection is undoubtedly a better indication of the rebellious elements that made the conservative types of the day so untrusting of the long hairs. Don’t go expecting any gentle, hazy psychedelia, or weird lysergic trysts here, but there’s plenty of rugged biker rock (including covers of “Born To Be Wild” and “House of the Rising Sun”), mixed with tracks that sound like San Francisco bands of the era attempting to rein in their jammier tendencies.
An embryonic version of Lucifer’s Friend (recording as Electric Food) contributes five tracks here, including an excellent version of “Up Around the Bend”, and “I’ll Try”, a storming original which sounds like the heaviest Traffic song you’ve ever heard. Elsewhere there are traces of earlier garage jangle with Ten O’Clock Bubble Gum Train’s “Hey Little Girl”, while The Petards (who would later release their own albums on Liberty) contribute a memorable, moody garage ballad with “My Little Heart”. And The Black Kids giving Melanie’s “Lay Down” the full San Fran treatment is a real treat.

An excellent twofer here then with plenty to recommend it, even if I could quite happily go the rest of my life without hearing another version of “Born To Be Wild”.