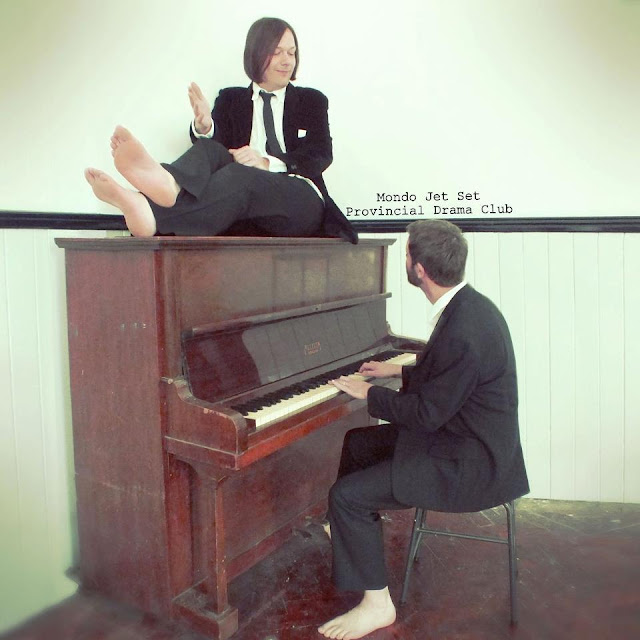 Mondo Jet Set's new album "Provincial Drama Club" is a godsend for those who're sick of waiting for new Pulp material to materialize - in fact it's so good that you're likely to forget about Mr Cocker and friends, at least while it's playing.
A Dorset based two piece (the ambitious arrangements make it sound like there are a whole lot more of them), Mondo Jet Set follow in the footsteps of the likes of Jarvis Cocker and Luke Haines - a lineage stretching back to Ray Davies, and at times "Provincial Drama Club" plays like a modern day "Village Green Preservation Society" transported to the big smoke.
Like the artists they evoke, Mondo Jet Set have a way of combining the wistful and the self deprecating into concise and precise character vignettes, like playwrites with short attention spans who'd rather create a three dimensional character than a world for them to inhabit.
The musical settings they cast these characters in run the gamut from sixties based pop, to the anthemic choruses of "Everyone I Know Either Dead Or On Fire" to punkish odes to the destructive capacities of Moths via the robotic pulse of "Jody And Her Wicked World".
They're at their very best when the music reflects the wistful nature of the lyrics - "High Above London", "The Last Night In The House" and especially "D'Arbley Street Escape" are classic examples of sixties schooled guitar pop - immaculately arranged and devastatingly English.