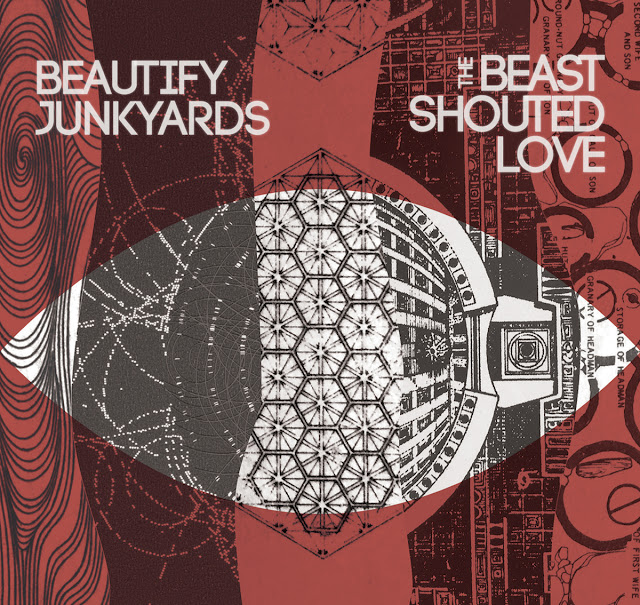 Back in 2013, this Portuguese psychedelic folk ensemble released an excellent self titled debut, a covers album featuring tunes originally recorded by Vashti Bunyan, Heron, Nick Drake and the odd surprise (Kraftwerk!?). As enjoyable as that self titled album was, few would have predicted that the followup would be the distinctive beast that "The Beast Shouted Love" is, a pastoral summer-folk gem, run through with a Radiophonic knife.

Channeling lessons learnt from their covers album into an album of all-original tunes, "The Beast Shouted Love" is an enormous step forward. Taking a leaf out of Heron's book, Beautify Junkyards chose various field locations for these recordings, "absorbing each atmosphere: vegetation, wind, birds, water" according to the liner notes, "all those elements became part of the process...." All of which gives "The Beast Shouted Love" an extremely appealing Autumnal British folk vibe, which could carry an album full of songs as lovely as these quite easily on its own.

Beautify Junkyards have other ideas however. Using these sparse acoustic recordings as a starting point, the band then spent time in the studio layering vocal treatments (check out the gorgeous vocal rounds on "Lake"), and waves of delicious vintage synthesizers, omnichord and xylophones, creating a thick, rich tapestry of folktronica, with obvious parallels to vintage BBC Radiophonic Workshop material, as well as the current Hauntology scene, without fitting comfortably into either camp. Beautify Junkyards have created a rich new strain of psychedelia here, one that was merely hinted at on their debut. It's an exciting new sound, that whether by accident or design, breaks down walls, and stretches its inspirations and influences into new realms.

The next time someone tries to tell you that psychedelia is played out and stuck in a repetitive holding pattern, play them this, and watch them squirm.

One of the most original albums of the year, and certainly one of the best.

CD and vinyl pre-orderable below, where you can also stream around half of the album, which releases mid September.