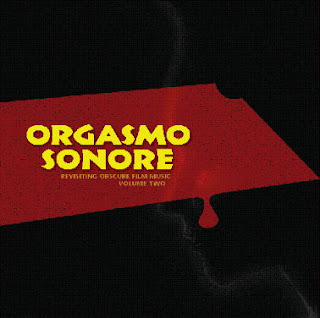 Montreal's Frank Rideau a.k.a Orgasmo Sonore does exactly what it says on the cover - revisits great pieces of mostly 70s/80s obscuro Euro film music and recasts them with his own steady hand. He's dug even deeper here than he did with the first excellent outing in this series. I was familiar with most of the source material on Volume One, but the titles he's chosen on Volume Two are generally more obscure and mostly unknown to me.
Whether it's the fact that most of these tracks are fresh to me, or whether Rideau has just become more confident in the studio, this stands head and shoulders above Volume One - no mean feat as that was pretty flash in it's own right.
Now admittedly, covering incidental music from obscure (but often wonderful) Euro horror films does have a whiff of the anorak about it (not a bad thing - I'm certainly one), so I'll understand if this isn't for everyone, but for those of a particular bent (me for instance), this is pretty much perfect.
Rideau's done an excellent job of adding a contemporary slant to these pieces when necessary, without compromising the oh so important period feel - not an easy task.
Apart from the marvelous analogue synthesizer sounds the most impressive and instantly noticeable ingredient is Rideau's exceptional guitar playing. Restrained when necessary, with a distinct Zappa-esque edge - indeed some of the more involved instrumental interplay here would sound right at home on one of Zappa's mid seventies albums.
If you're a fan of the likes of Ennio Morricone, Bruno Nicolai or Fabio Frizzi then this is a total no-brainer - you need to hear this!
Also well worth checking out for analogue synth buffs with a penchant for the funky and sinister.

You can Stream most of it through this Soundcloud widget: