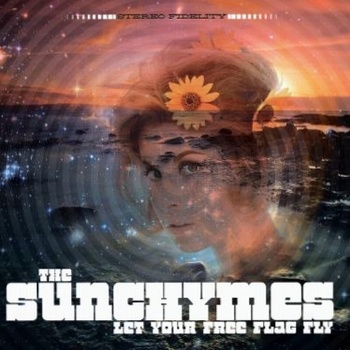 There were a whole raft of albums recorded in the late sixties with a reputation for being lost classics of Beatles / Beach Boys style psychedelic pop. While some of these - The Moon, Colors and Family Tree to name a few - do live up to the hype, there are also a substantial amount whose reputations seem to have been tweaked by unscrupulous traders wanting to make some serious coin on disappointingly naff harmony pop albums with little to recommend them other than magnificent period sleeves. Sleeves a whole lot like that of "Let Your Freak Flag Fly". This admittedly made me a little nervous to begin with - I've been a psychedelic record collector for long enough now to be burnt a few times by albums that look significant and deeply psychedelic, but sound like cast offs by the Seekers.
My trepidation was quickly dispersed however. Aaron Hemington's Sunchymes have clearly made one of the better album of 1967 with "Let Your Free Flag Fly" - the fact that they're running a little late (it's a late 2012 recording) doesn't bother me a jot.
I kind of picture Hemington as a moustachioed Saturday afternoon serial villain. He's managed to trick all of 1967's top musical geniuses into gathering in a secluded location, but instead of blowing them all up and causing chaos for the nation's youth, he's had a last minute change of heart and they've all collaborated on a musical experiment to try and work out what a rainbow sounds like.
Said rainbow would probably sound a whole lot like "Let Your Freak Flag Fly", a kaleidoscopic pop masterwork which recalls "Sgt Peppers", "Pet Sounds" and early period Harry Nilsson, all tied together with magnificent choruses and Hemington's ornate multitracked harmonies.
Check out "Your Disguise" if you don't believe me.
It's not all sixties worship though - "Uncle Alfred's Slide Show" proves that Hemington hasn't just stepped out of a time machine, being reminiscent of prime period XTC, only without the overwrought eighties production that makes those albums less of a pleasure to listen to now that we know better.
Highly recommended.