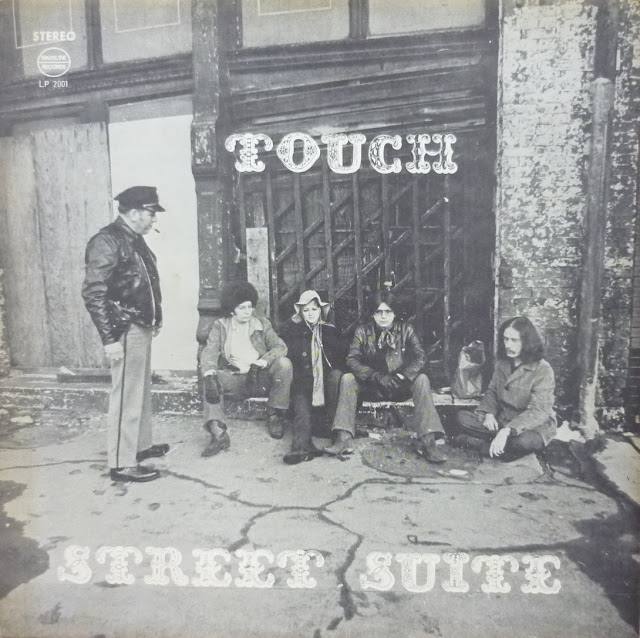 "Street Suite" is the sole album release of the St. Louis based Touch; released in 1969, this record splits the difference between psych rock, country, and blues rock. Vocal duties are split between Raymond Stone and Paulette Butts, two unique singers of two distinct styles. Butts' voice, a cross between Grace Slick and Bobbie Gentry, is husky yet gentle, and serves to temper the hokum style of Raymond Stone. While not technically a bad singer, Stone occasionally affects a forced Southern accent, which keeps the heavy blues jam of "Catfish" from reaching its full potential. He fares better on the Grateful Dead-like "Got to Be Traveling On," a funky country singalong, replete with kazoos. When he drops that affectation, he sounds less like Jerry Garcia and more like Jerry Reed or Dan Hicks. But Paulette is the real star here, and they know it. The opening medley may start off slightly cheesy anthem "Happy Face," but it turns into a rather serious political manifesto of "Beginnings/Get a Gun." She really shines on "Let's Keep the Children on the Streets,"  a protest song, and even though the band's style can generously be called a schizophrenic romp through blues, rock, and psychedelia, it's her powerful singing that keeps the song from falling apart. That ramshackle number gives away to the straightforward blues of "Motor City Burning," which then gives way to the funky and fine "Gettin' Off," with Stone finally showing himself to be the superb blues singer only hinted at in "Catfish." Shortly after this album was recorded, Butts left for California, a lineup change would shift the focus to Stone, and the band would split after releasing two singles. "Street Suite" is not a particularly spectacular album, but it still possesses that innocent charm that comes with a band's formative years.